If You Ever Wondered ‘What The Frig Are Those Dots On My Car Windshield?’ Here’s Your Answer 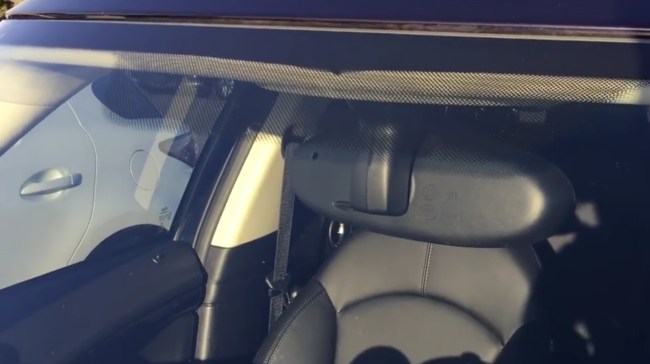 Writer David Tracy from Jalopnik was curious to these mysterious dots so he called Pilkington, a United Kingdom-based glassmaking company that is a major world supplier of toughened and laminated safety glass to the automotive, aerospace, and building industries.

That black border around your windshield is called the “frit,” and it is ceramic paint that is baked into the glass.

Here is why the frit is super important:

Prevents ultraviolet sun rays from deteriorating the urethane sealant. That matters, because the sealant doesn’t just keep rain out of the car, it actually holds the glass in place. The last thing you want is the sun to cook your adhesive, and send your window flying out the next time you hit a speed bump.

The frit band also acts to provide a rougher surface for that adhesive to stick to, and it’s a visual barrier, preventing people from seeing that nasty glue from outside.

The frit band became standard on essentially all automotive windshields since the 1970s.

The band is solid black around the edges and then gradually transforms into tiny dots called the “dot-matrix.” This is done for aesthetics and because it is visually more appealing than just abrupting stopping the band.

Another reason for the dots:

“Windshields are bent in a hot oven, and that, because the frit band is black, it tends to heat up faster than the transparent glass. A sharp thermal gradient between the frit and the clear glass can cause optical distortion, or ‘lensing,’ so faded dots are used to help create a more even temperature distribution, minimizing this distortion (and also hiding it from view).”

You may have dots on your windshield right behind the rearview mirror, these are called “third visor frit.” They protect the driver’s eyes from sun in the middle of the windshield where there is a gap between the two front sun-visors.

There you go, now you have some useless knowledge to regurgitate when you are bored to tears talking to some bore at your Super Bowl party.