Bartenders Share The Stereotypes They Associate With Popular Drinks 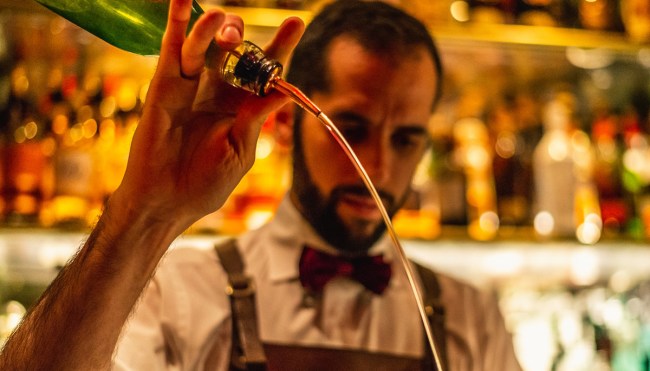 If you’ve never spent a night bartending in your life, I implore you to go out and put your name on a guest bartender list ASAP. The number of shenanigans a bartender at crowded bar witnesses in one night is more than any non-bartender could ever imagine.

Bartenders see people from every walk of life: the blue-collar guy who swings in every day at 6:17 PM for a shot of Jack before he goes home to see his family. The traveling businesswoman who can’t handle her liquor but has a hotel room upstairs and is confident she’ll at least make it there before puking only to end up throwing up on the bar counter after falling asleep while the jukebox plays ‘Friends In Low Places’ for the 14th time.

Bartenders see everything, and over time they see patterns.

Below are a bunch of bartenders on Reddit who shared their drink stereotypes for different people. For instance, the types of drinks they see hipsters and rednecks ordering most frequently. Obviously, these are just stereotypes and should be taken with a grain of salt, but it is interesting to see so many bartenders saying the same things over and over

The Stereotypes Bartenders Associate With Drinks

staapl:
Vodka soda with a splash of cranberry… dubbed “the white girl”

NoFunHere:
Former bartender here.
Young girls will generally order whatever is trendy in your particular bar.
Cops drink hard liquor in large amounts before getting in their cars and driving home.
Rednecks think drink orders define their masculinity.
Hipsters will drink anything new that you show them.

saditerranean:
Long Island Ice Tea is international alcoholese for I’m Just Here To Get F—ked Up

Ego_Tripper:
I think the Moscow Mule is the new Rum and Coke (at least around NY). Yes, I’ve heard of a Moscow Mule, Mom.

MatasterMatt:
Scotch: Older guys, or younger in higher positions, who think they’re hot s—t. I personally love some scotch. If he’s older or looks weathered, on the rocks or neat.
Vodka or Gin and sweet s—t: Every woman who dresses like she’s out to impress. I personally ask them their name; then I mix vodka with OJ, Cran and lime, maybe garnished with a mint. I name the drink after them and watch the tips roll in. Also an incredibly easy way to pick up women as a bartender.
Rye and Coke/Ginger: Cowboys. That and bud light, Corona or Kokanee.

CitizenWolfie:
Former bartender here. Here’s a few that applied in my bar (traditional pub in the UK):
Large scotch: Asian (Indian) guys. Usually when celebrating something. One of our Asian regulars once told me “We never ask for singles,” and you know what? He was right.
Jagerbombs: The Douchebags. The only times I was ever asked to serve these were when a bunch of guys were starting to get lairy. You could always tell the biggest douchebags as they’d come up and shout “15 JAGERBOMBS!” regardless of whether you were serving them or somebody else.
Cocktails: 40-something man-hungry ladies on a girls’ night out. For clarity, I’m referring to cocktails that are brightly coloured, have girly names and can be bought by the pitcher.
Snakebite (Lager/Cider mix): Students who don’t know any better and heard about the drink from a friend of a friend who almost died and want to beat them.
Real Ale: Neckbeards, hipsters and snobby CAMRA members. For reference, real ale is used here as an umbrella term for bitter, IPAs, craft beers, golden ales, stouts, porters, milds etc. CAMRA is an organisation of real ale enthusiasts in the UK.
Cherry B: Almost exclusively black women for some reason. Lots of cherries in the glass as well, the more the better. Cherry B is a cherry flavoured brandy wine that is quite rare to find on sale in pubs these days.
Sherry: Granny’s out for a Christmas meal and doesn’t give a s—t.
Pinot Grigio or Merlot: Specifically this type of wine, middle-aged harridans who think they know about wine but are unable to tell that I’ve poured them the cheap house wine.
Pint of any draft beer with a dash of blackcurrant, lemonade or lime: Grown-ass man-children who don’t actually like the taste of beer but still pretend to. For those of you Stateside, blackcurrants are berries that I believe were banned from farming in the USA in the early 20th century.
Gold Label (barley wine) mixed with lager: Regular Regulars who are one gambling slip away from homelessness.
Absinthe (shot form): See Snakebite.
Absinthe (Czech or Parisienne style): Pretentious wankers such as myself. Czech/Parisienne refers to the method it’s poured with – both involve sugar and water but different rituals.
Guinness: You pretend to be Irish on St. Patrick’s Day. Most of the Irish customers we had drank ale, lager or whiskey. Although the Guinness in my pub was f—king awful.
Cider (traditional/non-carbonated): Farmers with ruddy faces and wives who can beat the s—t out of you. And hippy, Glastonbury festival types.
(Rum/Vodka/whiskey) and (mixer): You enjoy drinking, but you don’t really like the taste of alcohol.
Gin & Tonic: For housewives who sit on the stairs and cry because your husband didn’t notice your new shoes.
Gin & Tonic with cucumber: For housewives who don’t care their husband didn’t notice their shoes because they’re f—king the pool boy.
Straight whiskies or whiskey-based cocktails: Don Draper wannabe and/or Pretentious Wanker. Again, like myself.
Corona with slice of lime: You’d rather be at a barbecue party than a pub.
Regular beer or cider: Boring.

BeMoreLikeMae1:
When I waitressed I assumed people who drank martinis were functional alcoholics.

yellowstuff:
I was at a wedding last weekend and they ran out of rosé at the rehearsal dinner and again the next night at the reception. The bartender was like “yeah, a lot of white girls at this party.”

I swear to god this happens to me every time I’m in a new city and drinking at some place I haven’t been to before:

Stockholm-Syndrom:
Not a bartender, but the stereotype is that the two people just before me will take a mojito just because it’s the longest drink to make.

I’m not really sure why this was included with the stereotypes but I think it’s worth including because this is a dick move:

Well what the hell do you want them to do?!

BrooklynNets:
As someone who, at close to thirty, just started drinking, it’s interesting to ask bartenders to recommend something while providing no upfront guidelines. A few will ask a question or two about my actual tastes, but most just look at me, then make a decision based on whatever they’ve inferred from my appearance.

WorkingNinj:
When I worked as a bartender we had a drink called woo-woo, it was the basic girl drink. Vodka, peach schnapps, and cranberry juice. Dance floor would within half an hour of a drink order get a “woo!” it’s when we knew the drink had hit.
Bros who ordered vodka battery would be a f—king nightmare to deal with (female here) and I’d nod to the bouncer if a bro was on his 3rd.
Straight whiskey 50/50 nice people/f—king pretentious assholes who would gatekeep me on how much I knew about it. Let me say that anyone is free to ask the bartender if she knows about certain drinks to not make bad drink choices, but these people knew everything and would just stand there asking and quizzing me to come off as clever/refined.
absinthe: 50/50 ‘I wrote a poem once and I’m really into wearing a six pence/WOO SHOTS’

theguyonyourleft:
Vodka Soda -Girl on diet
Vodka Soda with splash of [anything]-Annoying girl on diet
Vodka Martini-You’re boring, but you don’t know it yet
Dirty Martini-You will probably put anything in your mouth
Gin and Tonic, Negroni, Boulevardier, Aperol Spritz-You’ve got some class
Gin Martini-Eh, you’re all right
Manhattan-You are either a businessman, or you watch too much Mad Men
Tequila Sunrise, Midori Sour, Sex on the Beach, Fuzzy Navel-Let me check your ID again…
Anything with the word “Bomb”-Get out. Now.
Sazerac, Vieux Carre, Brooklyn, Toronto-Respect, especially if you can tell the difference between a good one and a bad one
Jack Rose, Aviation, Scofflaw, Last Word-You’re a hipster, but I’m into it
Long Island Iced Tea-See u/saditerranean definition
Any liquor+soda combo (except Gin Tonic)-Why are you still reading? You don’t know or care about any of this
Moscow Mule, Kamikaze-College kid
Cape Codder, Screwdriver, White Wine Spritzer-Grandma
Sangria-Girl’s night out
Pimm’s Cup-You’re either from Europe, or you want to be
Old Fashioned-You’re too concerned about what other people think of your drink order
Anything that ends in -tini-You’re not concerned enough about what other people think about your drink order**

That last part hits home because my dad will order anything on the menu if it looks delicious and I always give him s—t about ordering things that end in -tini. Today I learned that I’m a bad son and care what other people think about my drink order (though I do only drink things I enjoy). This person also said I’m classy though because my go-to drink order is a Negroni, so I’m not sure what to think.

Again, all of the bartender drink stereotypes you see above came from this AskReddit thread, so if you want to check out even more of them, that’s the place to do it.