An Oklahoma man who was just arrested for six felony warrants on his birthday should be excused of any wrongdoing after he lowered the bar for men across the world with one heartfelt act.

Police body camera video captured a handcuffed Brandon Thompson dropping down on one knee to propose to his girlfriend Leandria Keith before being hauled off to the clink. He had informed an officer before his proposal, and the officer agreed to let him have his moment because bros help bros even when they’re about to take away they freedom.

The bride-to-be was ecstatic about the romantic moment on the side of the road, proving she’s a keeper.

“Oh my gosh is he serious? But I knew I was gonna say yes. Like, I love him a lot … I guess it’s like an unconditional love, you know?”

“It feels great. I know that he loves me and I love him and we can get through anything together,” she added.” [h/t News on 6]

No mariachi band. No hot air balloon. No intentional viral video ploy. Hell, no ring either. Was Thompson’s proposal motivated by his desire to ensure his lady doesn’t dip into another D while he’s in the slammer? I cannot confirm or deny. But what I can say is that no matter how unceremonious your proposal is received by your girl, show her this video of Brandon Thompson just fucking winging it and she’ll immediately realize that it could always be worse. Because as far as my Facebook timeline is concerned, I’m going to need to base jump from the Empire State Building into a chariot carrying my bride-to-be and propose to her in a bed of long-cut roses. Not anymore.

So thank you Brandon Thompson for tearing down social constructs and making one large step for mankind. 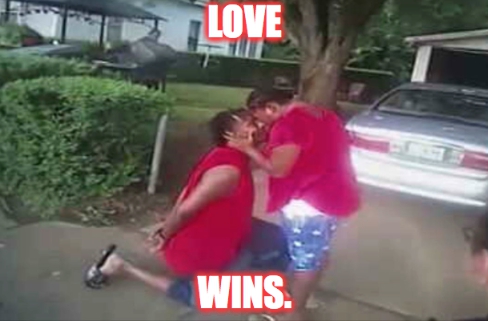 P.S. Is getting penetrated in prison considered cheating? Food for thought.