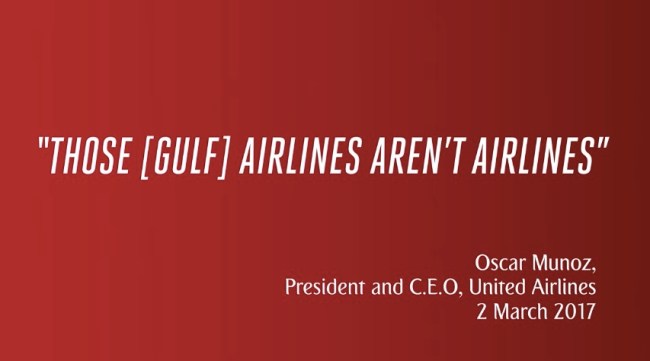 Emirates and United have beef. This beef it’s very old, but it’s real. It dates back a little over a month to when United Airlines President and CEO Oscar Muñoz talked some serious shit about Emirates Airlines.

This definitely wasn’t an expensive video for Emirates to produce, but it’s perfect in every way. Emirates could’ve just put up a picture of Oscar Muñoz’s face with the caption “People who live in glass houses shouldn’t throw stones” but that wouldn’t have been enough. United was JUST in the news for not allowing girls to board a plane while wearing leggings, and then they pull this shit. It would’ve been criminal if Emirates didn’t clap back.

For starters, United Airlines is almost unanimously considered to be a fucking joke. I found out this week that I’m one of the few people in America that didn’t hate United until this debacle happened and they threw a passenger off a plane, causing him to bleed down his face, terrifying other passengers. Their tone-deaf response didn’t help when the CEO idiotically commended employees for how they handled the shitty situation. The response from United Airlines was so atrocious, and the footage so disturbing that the federal government is now investigating.

United Airlines is in a full-blown PR fiasco at the moment. They’d still be the most hated entity in America if it wasn’t for Sean Spicer yesterday:

United: we had the worst PR disaster of all time
Sean Spicer: hold my beer pic.twitter.com/4pjJJ9Dusf

I haven’t ever flown Emirates Air because 1) I’m not very rich and 2) I haven’t been to the Middle East yet. But I look forward to the day when I get to experience what flying on the best airline on the planet feels like.