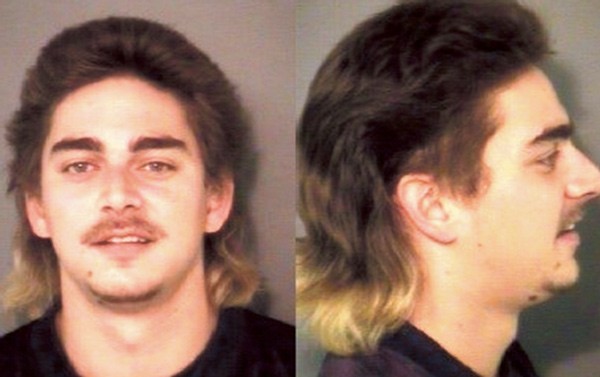 Here at BroBible, we make a strong effort to cover every story involving drunken chicanery but, well, we couldn’t possibly cover everything. Even with publishing over seventy stories a day, some stuff just slips through the cracks.

This past weekend, Joseph Gillespie was arrested and charged with possession of stolen property and possession of marijuana. He didn’t steal a car, buy a hot TV or do anything worthy of being tossed in jail. He just got a little too drunk at a local beerfest and boosted the Homer The Dragon mascot uniform of the local Triple-A baseball team, the Charlotte Knights.

Mr. Gillespie’s story somehow went unnoticed by the editorial staff here and that point didn’t go unnoticed by, as he’ll now be referred to from this point forward, Juicy Joe. Just look at the guy, I’m sure he’ll take the new moniker and run with it.

Anyway, so Juicy Joe noticed that we didn’t cover his story and emailed asking “WTF Bros?” It’s an honest question. I responded with another honest inquiry — “want to tell your side of the story?”

And that he did my friends. That he did. Here’s Juicy Joe’s side of what went down that night at BB&T park.

Went to a Beerfest they had last sat at the Knights stadium. Got hammered in about 2 hrs. The fest ended at 9pm. I found myself at 1230 am in the stairs must have blacked out drunk and past out there for a few hrs. So I figure out where I was and called my buddy to meet back up with him. On my way out I saw the sign “mascot dressing room.” That was an offer I couldn’t refuse.

Since I was left inside by myself. I suited up in the homer costume and hit the streets. Met up with my buddy at hooter and raised hell in there then went next door to a bar called tilt. They had a dance floor and you know I cut that rug to pieces. All the moves you’ve wanted to do but we’re to embarrassed to. Then met up with a bachelor party outside of their hotel and hot some shots and took pics with his past out dad.

A cop did stop me at about 330 or so and asked what I was doing out there so late. I told him it was bs they had me workin over time. Then he said alright have a good night and drove away. Finally hiked it down to the holiday inn where my buddy got a room. But my name wasn’t on the guest list so I couldn’t get in and he was past out drunk. So me and the green dragon suit jumped in an uber and shagged it back to my indian trail mansion. Was going to return the suit Sunday but nobody was at the stadium so I figured I’d take it back Monday to the team store. Well after the Oakland Raiders won on Sunday I passed out, woke up at 12am with cops at my door.

They locked me up but not before they took selfies and laughed about the whole situation. I did what every bro has ever dreamed of doing.

Our apologies to Juicy Joe for missing his story and we thank him for sharing it with us now. Hopefully, he gets off easy, as his hi-jinx were all in the name of good fun.