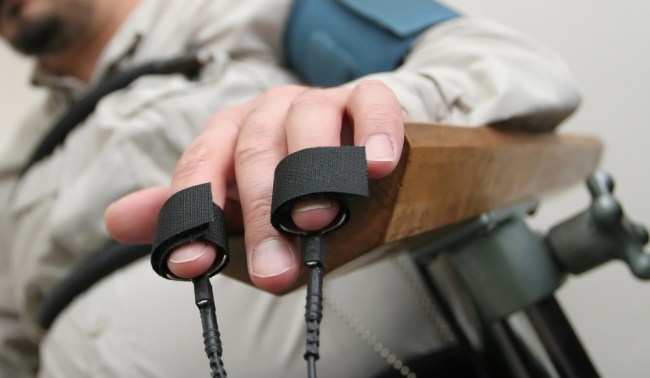 If you are ever unlucky enough to be in a situation where you have to sit down with a polygraph machine we have some good news for you. A certified polygraph expert has revealed a surefire way to beat a lie detector test and it is something that anyone can do. And no, it’s not the George Costanza method of “It’s not a lie…if you believe it.”

Here’s how it’s done, according to Mamamia and expert in the field, Doug Williams…

After joining the police force in Oklahoma in his 20s, [in] 1972 and after going to polygraph school in New York, he was a certified expert in lie detector tests. All day every day, he [ran] polygraph tests.

Before long, he grew tired. He began to doubt their effectiveness, he knew how to intimidate people to get them right. He believed the “more heinous the crime”, the more “likely an innocent will fail”. After all, even the accusation of a serious crime is bound to induce the sweats and get your pulse up.

Yep, that’s right. All you need to do is, erm, clench your anus in order to beat a lie detector test.

Williams even tried it on himself and voila! it worked. In fact it worked so well that in 2015, he plead guilty to obstruction of justice and mail fraud for teaching people how to pass lie detector tests. Whoops.

So there you go. The next time you have to take a lie detector test you will hopefully do better than Jerry did at hiding his Melrose Place obsession.