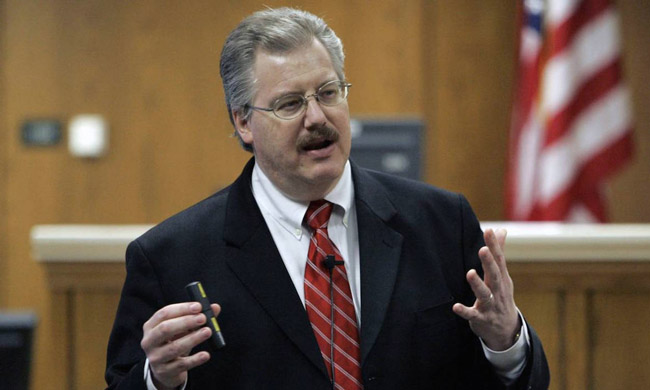 Former District Attorney Ken Kratz came off as a bit of a scumbag during Netflix’s hit documentary Making a Murderer about Steven Avery. And rightfully so, in my opinion.

That being said, in a new book he has written, Avery: The Case Against Steven Avery and What “Making a Murderer” Gets Wrong, Kratz takes some of the moments in the show which seemed most suspicious and pretty much turns them right around.

Remember the vial of Steven Avery’s blood that had a tiny hole in it that everyone freaked out about? Kratz explains it this way…

“We do not hear that the hole in the top of the tube was actually made by a nurse when the blood was first collected from Steven Avery, not be some phantom police conspirator. This is how all blood gets into collection tubes, as you are probably aware if you have ever had blood drawn yourself.”

But what about the broken seal on the box that contained that vial of blood?

“We see close shots of the broken seal on the box that contains the vial of blood. We do not hear that the seal was broken in the presence of Avery’s own Innocence Project defence team in 2002, in a meeting to review the available physical evidence for retesting in pursuit of his eventual exoneration.”

Hmmm… yeah, that wasn’t on the show.

Kratz also revealed a letter than Avery wrote him from jail in which he ACTUALLY ASKED Kratz to defend him in his appeal.

“You don’t work for the State no more so why don’t you take my appeal? You know the case and you got Candy Avery. See we can all get money together. This would be the truth that she Candy did it good.”

“You and another attorney can take it right? Let me know. Soon.”

Yikes. That’s… that’s not a good look for Steven Avery.

So, if Avery is TRULY guilty in Kratz’s eyes, why does he think viewers of the show are so firmly against him?

“Timing and technology, I thought, underpinned Making a Murderer’s success. The show burst out during an electric, transformative, pre-Trump period in our country. Notoriously conservative America seemed to be leaning left, newly willing to challenge law enforcement. Many of the police shootings that fueled the Black Lives Matter movement resulted in no charges being filed against cops (think Baltimore, Ferguson), and yet the American public clamored for the freedom of a white man, Steven Avery, who was, by any measure of the evidence, stone guilty. This fascinated and, frankly, surprised me. When Making a Murderer took home four Emmys, it seemed that those who judge popular culture had sanctioned a newfound activist spirit, if one inconsistently applied.”

Okay then, surely Kratz feels the way Brendan Dassey was handled was misguided and he has regrets there, right?

“I lose no sleep over my prosecution of Brendan Dassey. I was a prosecutor with a dead young woman and her surviving family for which to pursue justice. It was not my fault that Brendan was easily manipulated by Avery, or had a low IQ, or was shy, or that he made a dozen inconsistent statements. I believe Brendan could have saved Teresa’s life, but chose instead to involve himself in the rape, murder, and mutilation of an innocent woman. I have always said that he did not deserve life in prison, and should have taken the plea bargain that I offered him. But I couldn’t, and can’t make Brendan’s choices for him.”

Ah yes, there’s the Ken Kratz was came to know and hate.

Still, as this book gets read by people it will very interesting to see if everyone is still so gung-ho to see Steven Avery released from prison. Again.