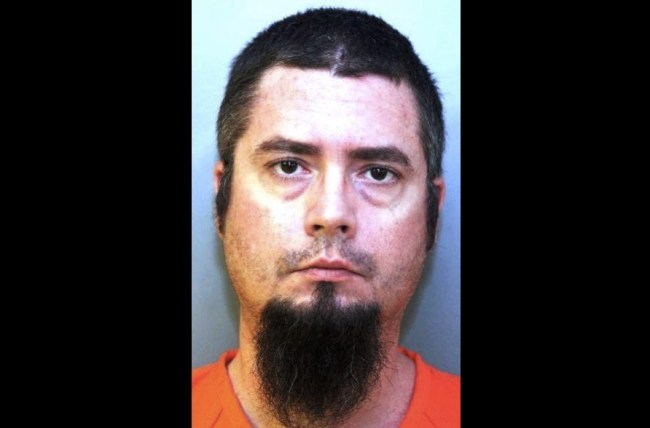 His name is Howard Van Sweringen. He is a 41-year-old man who is accused of pursuing a chick so hard that he rammed her car several times with his truck and, in a moment of what can only be described as otherworldly stupidity, he THREW HIS FUCKING DOG AT HER. Picked up his dog, and chucked that little fucker right at her. Why, Howard? Why would you do that?

The woman who endured Van Sweringen’s assault was 35-year-old Kristina Fuller. And her account of the story of his hot pursuit is like reading what I would imagine to be every woman’s worst nightmare.

Fuller’s comments via The Ledger:

“At every stop sign, he would come up next to my truck,” Fuller said. “I started going down random roads just to try to get rid of him.”

When she got to Harden Boulevard and Beacon Road, the situation got even scarier, she said.

“He gets out of his truck, walks up to my door and I roll down my window a bit,” Fuller said. “He threw his dog through the window.”

Afraid the miniature pinscher would bite, Fuller threw the dog back to Sweringen.

“I was yelling at him,” she said. “He gets back in his truck and starts hitting my truck from behind.”

Jesus Christ. The only thing that could possibly make this more terrifying for her is if he was dressed up as a clown at the time of the incident. Could you imagine? I don’t think I’d be able to sleep at night without a fully loaded oozie by my side.