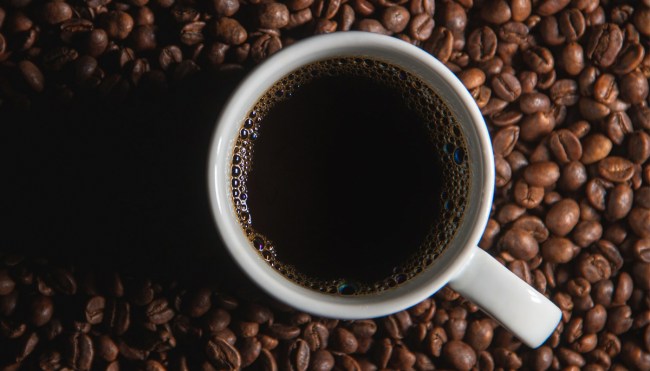 Contrary to the popular belief that coffee drinkers are the worst people on earth, I put to you that those who drink coffee —specifically black coffee—are a superior breed of human beings on this planet.

Why black? Because when you’re starting out it could be bitter as hell (especially if you’re used to the taste of diabetes-inducing sugar water). With that said, people who force themselves to do something that is temporarily bitter but will make them awesome? That’s called self-discipline (similar to cold showers).

The best part is that once you’re accustomed to having your Joe black, you gradually appreciate and fall in love with the taste of true coffee, the real deal.

I’m not hating on you green tea and pumpkin spice latte lovers, but those who down a couple of black java every day are awesome and you’ll be secretly jealous when we show you the science (read till the end for some lesser-known “hacks” to upgrade your coffee game).

To begin with, there’s some remarkable history behind the good old cup of coffee you drink without thinking every morning. It is said that during World War II, US soldiers were supplied with as much coffee as they wanted. Coffee was a source of warmth and comfort for the troops. While I don’t pretend to be a history nerd or someone who even paid attention to history lessons in high school, one thing is for sure – the satisfying aroma that humanity’s favorite beverage emits is a sensation no legal substance can compare.

You will prevent erectile dysfunction

Unless you’re like me — someone who lists ‘good in bed’ when they ask for your ‘skills and talents’ in job application forms — drinking some Java every day is one of the best habits you can acquire for your sex life. Just trust the scientists at the University of Texas.

You will live longer and healthier, giving you more years to enjoy the finest things in life

We already know the numerous health benefits of coffee drinking – it has tons of antioxidants and lowers the risk of many terrible illnesses such as Type 2 diabetes, Alzheimer’s disease and colorectal cancer. Chances are you’ve already heard of all these mumbo-jumbo so I won’t bore you by going into detail. Fun Fact: Americans get more antioxidants from coffee than any other source (including fruits and vegetables).

Fun Fact II: I used to suffer from debilitating chronic headaches, and the brain specialist at the hospital prescribed me caffeine pills. Thankfully I didn’t require ten years of training to become a neurologist to realise that I should just drink black coffee instead. Now I can go on Tinder dates without having to break the girl’s heart by rejecting her for sex due to a sudden onset of migraine.

You can get shredded

If you are one of those fitness junkies who own a cabinet full of fat-burning supplements, I want you to take all of them out now and read the ingredient list. I’d bet that almost every single one of them contains caffeine.

Why? Because caffeine is one of the rare natural substances that is actually scientifically proven to be effective at burning fat. Has the debate over lean physique versus dad bod been settled?

Just let me know when it’s finally settled while I continue drinking my beloved coffee.

You can save money on pre-workout supplements

Now that you have thrown away all your exorbitant commercial fat burners, I give you permission to go a step further and ditch your pre-workout supplements.

I’ve nothing against them and if you have too much money to spare and your fitness trainer swears that it can transform you into Captain America then suit yourself. But if you’re a broke college student who wants to save some moolah, a cup or two of black coffee is all you need to get a pre-workout kick.

You will feel freaking good

Not only does caffeine improve your energy levels, enabling you to lead a better quality of life in today’s insanely fast-paced society, it actually blocks this neurotransmitter called adenosine. As a result, other feel-good neurotransmitters like dopamine and norepinephrine increase.

This means you will feel more emotionally stable and won’t flip out so easily. Combine this with a kickass cold shower and you will feel like the King of the World in no time.

A 2011 Harvard study showed that women who drink 4 or more cups of coffee a day had a 20% lower risk of depression. Another large-scale study found that individuals who did the same thing were 53% less likely to commit suicide.

Any questions? Well, maybe I can address them.

Well, it does, but the small effect lasts only temporarily. This will go away in regular drinkers. In fact, some studies suggest coffee REDUCES the risks of heart disease and stroke.

Must I really do black coffee? I love my overpriced latte from the coffee shop across the street?

While I don’t have anything against that expensive calories-laden-colored water that people call coffee, I’d choose a simple black coffee over that any day. The tons of added sugar and cream probably override whatever health benefits you’re getting from the coffee and caffeine.

If you’re addicted to sugar, a tip is to cut down the amount of added sugar gradually. Over time, your taste buds will adjust and you will appreciate the aroma of real coffee without all the additional junk overpowering the wonderful natural flavor of coffee beans.

What’s the best way to drink coffee to get the most bang for my buck?

Here’s the right approach: do NOT drink your coffee first thing in the morning. Your body has a natural mechanism to wake you up by releasing the stress hormone cortisol in the morning.

Scientists believe that drinking coffee (or any energy drinks) upon waking up diminishes the buzz and may even cause tolerance in the long run.

So hold back on the caffeine for at least an hour or so. Some people also believe that the body absorbs caffeine better when it’s in a hydrated state; I always get a glass of plain water in before I brew my coffee.

How can I prolong the effects of caffeine without reaching for another cup every hour?

The half-life of caffeine is around 5-6 hours, depending on your metabolic rate. There’s a pretty cool way of slowing down the breakdown of caffeine in your body: echinacea.

You may have heard of echinacea being touted as an immune system booster, but not many people know it also extends the life of caffeine in your system.

HELP! You told me to drink coffee and now I suffer from bloody insomnia every night!

A: Don’t worry – there’s an antidote to caffeine that you’re unaware of because you never listened to your mom when she told you to consume your greens. The answer is…broccoli.

Yes, if you have trouble sleeping at night due to excessive coffee during the day, eating broccoli at dinner helps flush caffeine out of your system. You can now enjoy your Java without reservations with this little life pro-tip.