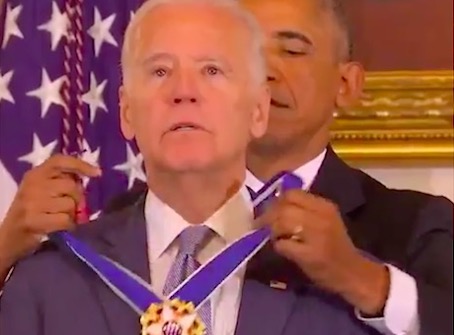 Today, the outgoing POTUS surprised his emotional Vice President and best bro by awarding him the Presidential Medal of Freedom, the nation’s highest civilian honor. Obama’s tribute to Joe Biden was heartfelt and real, as he called his good friend “the best vice president America’s ever had” and a “lion of American history.” With Biden fighting tears in the background, Obama also hit the nail on the head when he said “Folks don’t just feel like they know Joe the politician, they feel like they know the person.” Which is true considering there is no doubt in my mind that Joe Biden would take a keg stand at a rager if he didn’t sign up to be a beacon of professionalism.

The most brotastic moment came when Obama joked about the internet gobbling up their 8-year bromance.

POTUS calls Biden "the best vice president America has ever had…this also gives the internet one last chance to talk about our bromance." pic.twitter.com/aKNDjNvULx

Joe’s reaction to being awarded the Presidential Medal of Freedom is moving, regardless of your politics.

Biden was granted a chance to speak afterwards and had high praise for Obama as he closes the door on eight years as the leader of the free world. Biden lauded, “I’ve never known a President, or very few people I’ve ever met, who have the integrity and decency like you do.”

"barack please don't leave me with them"
"joe you're leaving when I leave"
"oh right lmao love u" pic.twitter.com/zfIt3Bv0wl

Biden: Trump better not get in my face… cos I'll drop that motherfucker
Obama: Joe.
Biden: pic.twitter.com/oB6kUbBvuQ

Biden: …so, when Trump walks in, you duck and I sock him wit-
Obama: No, Joe pic.twitter.com/sJIejb1rEN

Biden: How do I throw everyone off the White House Netflix account? I'll be damned if Trump is gonna mess up my suggested list pic.twitter.com/UvcbA6TxEp

Obama: Did you replace all the toiletries with travel size bottles?
Biden: He's got tiny hands Barack, I want him to feel welcome here pic.twitter.com/e7NRIZ43Ww

Biden: I gave him the wrong address

Biden: idgaf what they call him pic.twitter.com/6pQzOJY92x

Biden: Like heck am I leaving him any ice cream, Barack here take a cone
Obama: Joe you know I'm lactose into-
Biden: Like. Heck. pic.twitter.com/zXGOTS2pNs