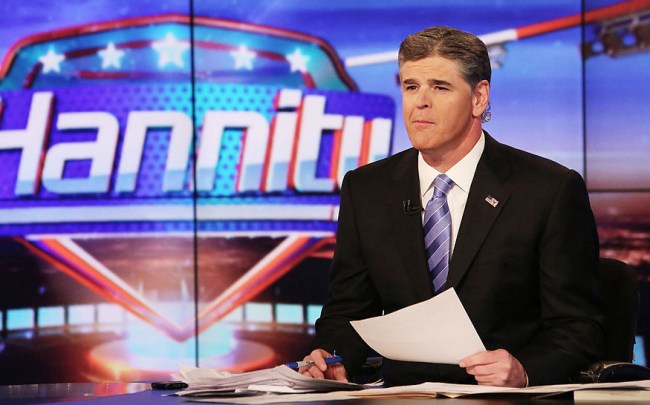 I have the impression that Sean Hannity, much like Skip Bayless and Piers Morgan, only believe about half of what they say, but say what they do mostly just to get a reaction.

As our esteemed President Donald J. Trump once said, “Good publicity is preferable to bad, but from a bottom-line perspective, bad publicity is sometimes better than no publicity at all. Controversy, in short, sells.”

And speaking of Mr. Trump, a couple of days ago Hannity decided to ask the always rational folks on Twitter a political question involving our President…

Question of the Day: Do you think the left is trying to destroy the Trump Presidency? #Hannity

Oh my. There is no way Hannity didn’t think that the Twitter troll army would be lining up to answer that one.

And that they most certainly did…

@seanhannity Yes the Left held a meeting with him and then forced Putin to be his friend…also they made Kellyanne make up a massacre.😉

@broussard_troy @seanhannity Yep. We surgically removed his frontal lobe and delivered him to Putin in our old Subaru.

@seanhannity Question of the day: Does a dumbass self-destructive president need any help?

@seanhannity If by the left you mean the NSA, FBI, CIA, DIA, the DOJ, and the State Department, then ‘yes’ the left wants to destroy Trump.

.@seanhannity How? By reporting the shit that Trump and his administration are doing? Sorry if real life is "trying to destroy" it.

@seanhannity Real Question of the Day: WTF is wrong with Sean Hannity? The President's NSA broke the law and he's asking this???

@seanhannity No, I think Trump and his moronic band of misfits are doing a good job of it by themselves.

@seanhannity Is he the left? Because he is clearly destroying himself – bigly.

Not everyone was against him though…

.@seanhannity Yes, but Trump is beating them to it.

@seanhannity There's no question in the sane mind that they are. He's done nothing but good things since the moment he was elected.

Wait, was that last one being serious or is this like some kind Inception-level trolling?