This Video Of A Man Smoking Crack And Setting Himself On Fire Is The Greatest Anti-Drug PSA Of All-Time. PERIOD. 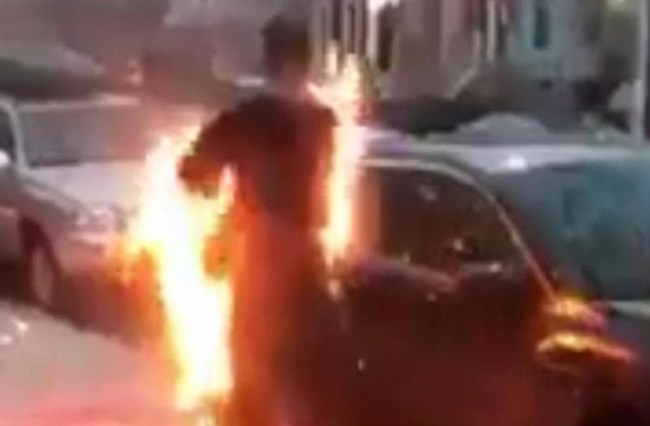 There have been millions of dollars spent on the drug war including large amounts of cash poured into creating anti-drug public service announcements.

We had the “I learned it by watching you dad” PSA.

We had the “This Is Your Brain On Drugs” PSA.

We had the Teenage Mutant Ninja Turtles PSA that taught the important lesson that drug dealers are “dorks.”

All those millions and millions of dollars spent on anti-drug promotion when all they had to do was post this free viral Twitter of a man setting himself on fire while blitzed out of his gourd on crack.

A man in Brooklyn accidently set himself ablaze while smoking crack after he put his still-burning cigarette lighter in his pocket. It caused his clothes to go up in flames, but he was so incredibly fucked up on crack that he didn’t notice that he was on fire and casually walked down the street. Maybe he’s just a really, really big fan of Richard Pryor?

Ziearre Flowers saw the human fireball and asked the man if he needed help, but again the man was so messed up he just continued to leisurely stroll down the street. The man became the “This is fine” dog meme but in real life.

ONLY IN NYC! We do not know who recorded this or any details. Warning: Kinda disturbing pic.twitter.com/dqVmBV435p

Sources said the FDNY and NYPD responded, but by the time they arrived the man had disappeared, and no one could tell them who he was or where he had gone.

The following day, FDNY fire marshals returned to the scene and eventually uncovered the identity of the man, whose name is being withheld, and went to his home.

The victims’ relatives told investigators that unbeknownst to them, he apparently came home Sunday night after the incident and went straight to sleep, leaving them unaware that anything had occurred.

When he woke the following morning and came out of his room, the relatives said they looked at him in shock and asked him, “What the hell happened to you, you are all burned up?” sources said.

The victim, apparently unaware of how badly he was injured, told them he accidentally set himself on fire while smoking crack when he put his still-burning cigarette lighter back in his pocket.

And that is how you make the greatest anti-drug PSA ever. Show this self-immolation video to the second graders and they’ll never smoke crack.

I’ll never smoke crack now that I know that crack is wack and could set me ablaze.

P.S. How bad is the scratching going to be on third-degree burn wounds?