Uber has had a tough year, optics-wise. The $70 billion ride sharing company recently saw its CEO step down to find the “2.0 version” of himself, just weeks after the company admitted to owing its drivers tens of millions in backpay for taking its fee before deducting taxes and other surcharges. The company was then slapped with another class action lawsuit, this time by the consumer, accusing Uber of charging hidden fees with it’s “upfront” pricing model — resulting in a $7.4 million windfall per month.

This dogshit PR for Uber may lead one to believe that the company’s perception is taking a hit, but that couldn’t be further from the truth. According to a survey by YouGov BrandIndex, a public-perception research firm that interviews over 1.5 million consumers yearly, Uber ranked as the most improved brand among millennials.

The survey evaluates metrics that produce a customer score based on the percentage of U.S. millennials who are current customers of that particular brand. Current customer means they bought the product or visited the web site within the past 30 days, according to AdWeek. 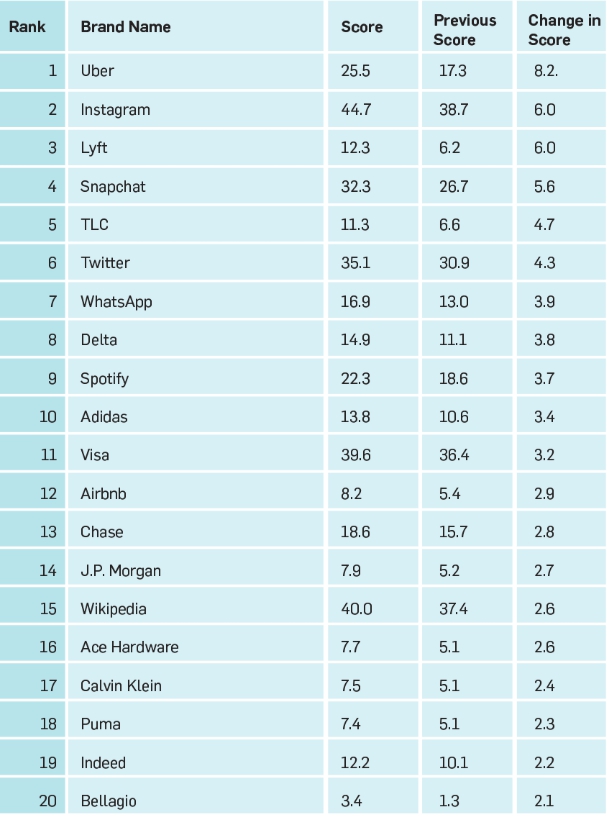 Uber grew its millennial customer base by a whopping 8.2 percentage points over the last year, despite its ethical snafus.

YouGov BrandIndex CEO Ted Marzilli claims that although millennials are more socially aware and politically progressive than their elders, convenience is king.

“I’m not saying millennials are not concerned about ethics,” Marzilli said. “But people in the aggregate tend to make choices that are in their financial interests. So if taking Uber is more economical or convenient than waiting for a cab, I’m probably still going to call Uber.”

Another interesting finding of the study, as AdWeek points out, is that  half of these millennially-beloved brands are companies that were around before the internet existed (i.e. Adidas, Visa, Puma, ACE Hardware). This finding flies in the face of the notion that millennials have a distaste for older brands, in so far as the brands adapt with the social climate.

“The existence of brands on this list that weren’t around 10 or 15 years ago suggests that, for millennials, the most important thing is that the brand is relevant and resonates with any consumer group,” Marzilli said. “So if the brand doesn’t provide the value, it doesn’t matter.”

Moral of the story: Uber can run over a homeless person but as long as it is cheap and convenient, millennials are in!