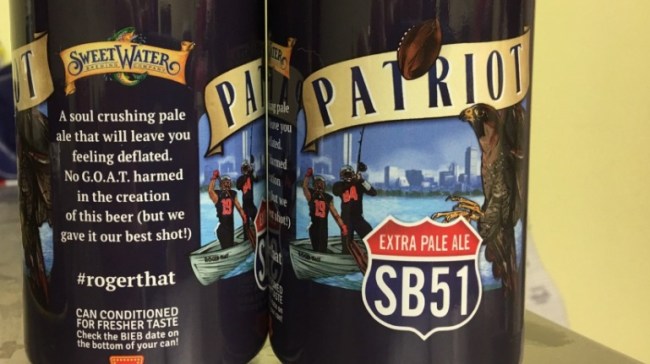 The Twitter smack-talk between Boston’s Sam Adams Brewing Company and Atlanta’s SweetWater Brewing Company was one of the better storylines going into Super Bowl 51. SweetWater made good on the bet a couple days ago, announcing their Patriot SB51 Extra Pale Ale. It’s “a soul-crushing pale ale that will leave you feeling deflated.”

Trolls gonna troll, even when taking it on the chin from Bill Belichick and the evil imperial football empire.

when you realize it wasn't just a bad dream and you gotta pay up on your bet with @SamuelAdamsBeer pic.twitter.com/Yx8b52u9HY

it’s the bet that keeps coming back to bite us in the ass @SamuelAdamsBeer. We have 100 of these god awful cans at tours for souvenir beer pic.twitter.com/hWNkJtBihQ