Genius Teenager Pulls Off Clever Way Of Swindling His Way Into The VIP Section At A Concert, And I’m Def Trying This 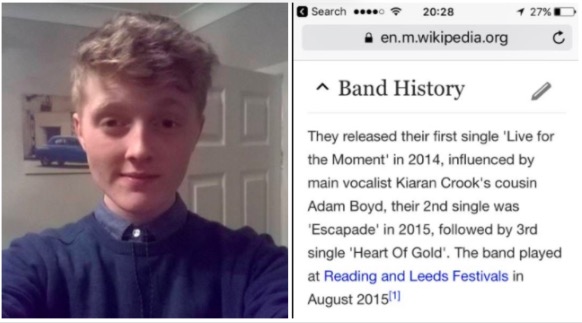 Everyone knows the VIP section of a concert is restricted to hot girls and guys with fedoras and deep v-neck tees. People in the VIP are so up their own asses about being in the VIP, they often don’t even bother enjoying the performance. I’m looking at you, CHAD. But if you’re the type of dude who can use the VIP for its prime real estate while still immersing yourself in the music, it can be transcendent.

And that’s exactly what this Average Joe teenager from England managed to do, with zero credentials and no fedora.

Adam Boyd successfully managed to swindle his way into the VIP section of The Sherlocks gig last Friday in Manchester after changing the band’s Wikipedia page to say he is the singer’s cousin.

He and his friends arrived to the concert late after their train was delayed and found their view was so bad, they couldn’t see the support act.

Adam noticed a bouncer guarding a VIP section upstairs and decided he would take his chances at trying to get in.

His plan was to pretend he was a relative of the band.

To make his claim have a bit more substance, Adam wrote that he was the cousin of lead singer Kiaran Crook and he influenced the band’s first single, ‘Live for the moment’.

Adam said: ‘I cannot believe it worked. I was expecting to be kicked out for trying.

‘The Wikipedia idea came about due to my frustration of not being able to see any of the supporting band and worrying if I’d have the same problem with The Sherlocks when they came on.

‘Because we were next to the bar downstairs, I looked up and saw the VIP entrance and told my friends “I’m going to try and get up there” but they were calling me an idiot and saying I wouldn’t get in.

‘Regardless I went up, made my way to the area, and realized I had no way of actually getting in. I needed an excuse, a reason to be let in. I don’t know how the idea climbed to the top of all the other drunken ones I was probably having then, but it came to me to change their wiki page so I was included in it.’

Personally, I’d rather be the with common men in the pit of a concert rather than with the chicks who are only there to take Instagram pictures, but I’m sure glad I now have this tactic in my back pocket. Right next to the drugs.