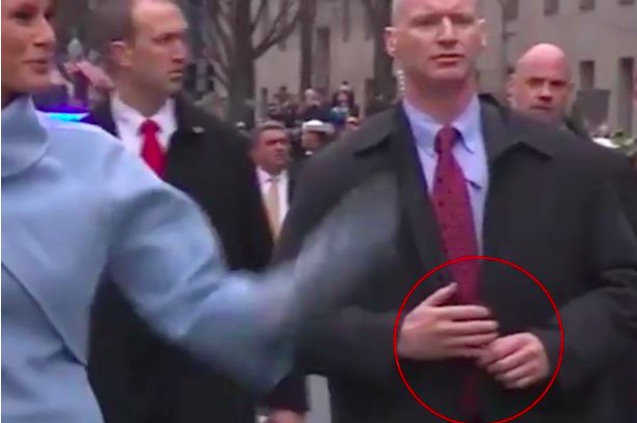 Social media conspiracy theorists are off to the races with the particularly peculiar claim that one of Donald Trump’s bodyguards was wearing fake arms at the inauguration. Yes, this is real news, covered by real reputable news sites. Welcome to 2017.

Why does @realDonaldTrump have a bodyguard with FAKE ARMS pic.twitter.com/viTcVs2hYx

According to The Sun, people have made military personnel aware of their theories and some have compounded their beliefs.

“Their conclusion is they believe he had fake arms so he could conceal a fully automatic rifle in the ready position under his coat.

“Numerous members of the military community speculated it was likely a FN-P90 rifle.”

Others are quick to stomp out these rumors. Via Daily Mail,

Task and Purpose writer Adam Linehan, a former military man, points to one image of the agent getting out of a car: ‘The bodyguard, in the background of the image, exits one of the vehicles in the motorcade, and adjusts his tie and coat the way a man – a human man with functional arms – does whenever he’s about to appear in public.’

The video below seems to correspond with Linehan’s thinking.

No, his arms weren't fake. pic.twitter.com/zR2xK2ZMoJ