Guy With 1.6 Million Followers Shares What It’s Like When Kevin Durant Comes At You For Posting Memes About Him 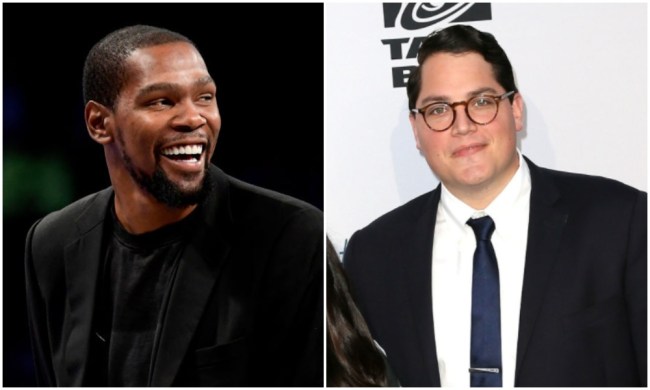 Whether it be from his own personal account or through a burner account, Kevin Durant has been in his fair share of feuds on social media over the years. The most recent spat involved Michael Rapaport, but peak confrontational KD came back when he left the Thunder to form a super team in Golden State years ago.

The majority of NBA fans and anyone that understands the concept of sports at all seemed to be calling Durant a snake when he joined up with Steph Curry and Klay Thompson in the Bay. One of those people that jumped on the snake train was Ben Soffer, aka Boy With No Job on Instagram.

Soffer is among the meme kings on Instagram with over 1.5 million followers and recently joined Harold Varner III and George Savaricas on the Rippin’ It podcast sharing a story about how Durant personally responded to one of the snake memes he posted about him.

“Look, I tagged him in a picture of a snake. It is what it is,” Soffer explained. “Everybody was calling him a snake, I didn’t mean anything by it, but yeah, we had a rough exchange. The truth is though, I called Kevin Durant a snake. He bugged out. And immediately I was like ‘no, bro, I swear, I love you.'”

Kevin Durant didn't like being called a snake and slid in @boywithnojob_'s Instagram DMs to let him know. 😂🐍

He talks about KD, memes and golf on Episode 5 of @RippinItPod with @HV3_Golf and @GeorgeSavaricas.

There you have it, yet another example of KD sliding into a stranger’s DM’s worried about a completely harmless meme.

To Durant’s credit, he’s since made it clear that there’s no chill when it comes to his social media presence, tweeting that “I’m on 10 until I close the app.”