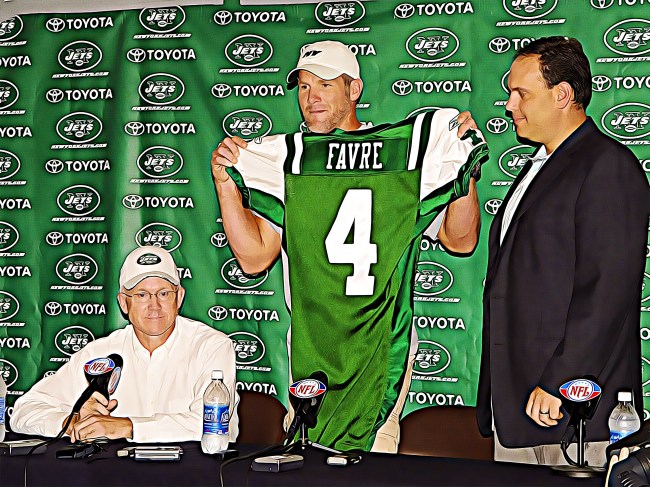 On August 7, 2008, Brett Favre signed with the New York Jets, a curious development for a guy who spent the previous 15 years in a state whose entire population could fit in 432 Park Ave and whose idea of a night out was a trip to Bass Pro Shop.

The consensus at the time was for the Gunslinger to land in Tampa Bay to reunite with Jon Gruden, who served as a Packers offensive assistant coach Favre’s rookie year, as well as Tampa’s stone’s throw proximity to his home state of Mississippi.

But the 3x NFL MVP inked a deal with the (then-promising) New York Jets, 1,140 miles from home, thanks in part to some creative recruiting from the Jets front office.

We spoke with former Jets GM Mike Tannenbaum, who is now behind the popular football think tank publication The 33rd Team, about how he was able to maneuver the country boy to The Big Apple.

Former @nyjets GM @RealTannenbaum's method for securing @BrettFavre to the Jets is nothing short of GENIUS.

At our core, our needs are all very basic. Even Hall of Famers.

“One of the things I think is underrated about recruiting is being a great listener.

We knew that Brett was a hunter and a fisher, he loved to fish. So we got Google satellite imaging of farms and places to hunt and fish that were within 10 miles of the facility.

We sent it to him. I put together a schedule, I said, ‘Brett, on Monday you’re in the facility for recovery, it’s getting the game plan, Tuesday is mandatory hunting and fishing. If you don’t hunt and fish on this farm, I’m going to fine you.'”

You may be cool but you'll never be Brett Favre deer hunting cool. pic.twitter.com/lGbctXUPlQ

The satellite hunting images were just a tasty appetizer for what locked Favre into the Meadowlands. The real pull was, of course, Real. Comfortable. Camo Pants.

“As we’re closing the deal, he goes, ‘Hey Tannenbaum, is there a dress code?’

I was like, ‘Not if you come. What size waist are you?’

I’m like, if you agree right now to be a New York Jet, I’m going to get you a pair of custom made 38-inch waist camo pants.’

We are all quite similar in the end. We all want the world, but need just a few things.

Check out our entire interview with Mike Tannenbaum below and check out The 33rd Team for the nitty gritty of the sport you love.