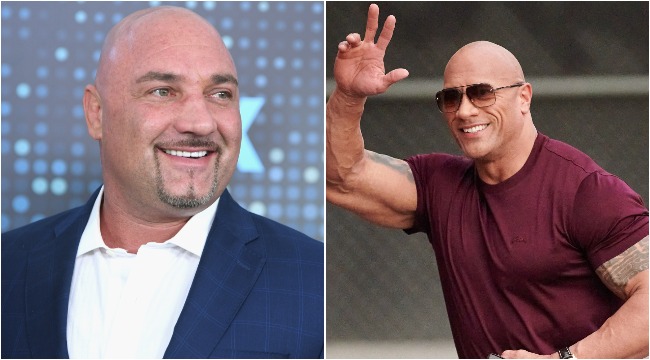 When the aliens come down in May 2021 with their ageless skin and technological miracles, our only defense against species-wide annihilation will be Dwayne ‘The Rock’ Johnson, the only homosapien capable of cross-planet diplomacy and convincing otherwise straight men that sexuality is a spectrum.

In a world where ever dancing talk show hosts aren’t immune to cancellation, Mr. Johnson has lived 48 years without a proverbial stain on his ultra-white chompers.

On Thursday’s episode of our Endless Hustle podcast, we spoke with Fox Sports Insider and Johnson’s longtime friend, Jay Glazer, in an effort to discover if People’s Sexiest Man Alive is as flawless as my wife believes him to be.

Glazer claimed that The Rock and Sylvester Stallone are the two people who he’s met in his life with an intoxicating all-encompassing aura that is unmatched. He went on say that a week doesn’t go by when someone reaches out to him to try to get at Dwayne.

“A lot of times someone will call and say, ‘Hey there’s a sick child here, huge fan of The Rock, any way you could do something?’ And when I shoot Dwayne this, he shoots a video over immediately, for this child who’s fighting for their lives. He takes what God has blessed him with an gives back, man.”

After wiping the tears from my eyes, I challenged Glazer to reveal one derogatory comment about Mr. Perfect. Glazer racked his brain before claiming that sometimes “he takes a day to return your calls because he’s so busy,” so I pushed harder.

Tried to get The Rock's good friend @JayGlazer to say one bad thing about him. The search goes on. pic.twitter.com/U7Sinhd4vX

2021. 2021 is the year we find out The Rock claps when his private jet lands and his house of cards comes crashing down. Book it.