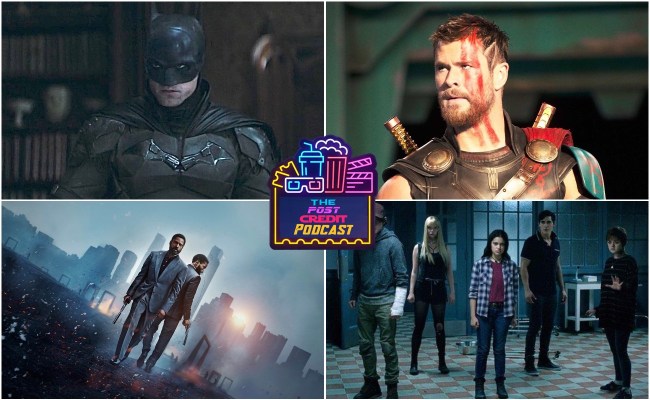 In a year that’s been utterly devastating to the film industry, this past week has arguably been entertainment’s best since the world shut down back in March.

Not only have movies begun to trickle back into to the theaters (Russell Crowe’s Unhinged last week, New Mutants on Friday, Tenet next week), but a bevy of news and trailers was released over the weekend at DC FanDome.

From The Snyder Cut to The Batman and The Flash to The Suicide Squad and Wonder Woman 1984 (dropping on October 2), Warner Bros. gave fans their first taste of what’s to come in the next year, only further reminding movie lovers of how much we miss, well, going to the movies.

On today’s Post Credit Pod, Brandon and Eric discuss said trailer for The Batman, particularly how it appears to be teasing the inclusion of a new Batman villain that’s never been seen on the big screen before: the Court of Owls.

Essentially the Illuminati of Gotham City, the Court of Owls is a secret society of the city’s wealthiest and most powerful families who’ve been controlling Gotham and its people for centuries. And given the world Reeves seems to be building with The Batman, the Court of Owls couldn’t be a more ideal choice of a three-film-franchise nemesis.

Then, we discuss the rumors of Chris Hemsworth being eyed to star in the coming Mad Max Furiosa spin-off, which, for me, sounds like the biggest no-brainer of all-time. We then discuss our excitement (or lack thereof) for New Mutants, Tenet, and the return of movie theaters, before closing up shop by debating our favorite (non-Batman) Christopher Nolan movies. Also make sure to stick around to the end, as we also flip a coin to see how gets first pick in our upcoming Fantasy Football style superhero movie draft. Electric stuff.