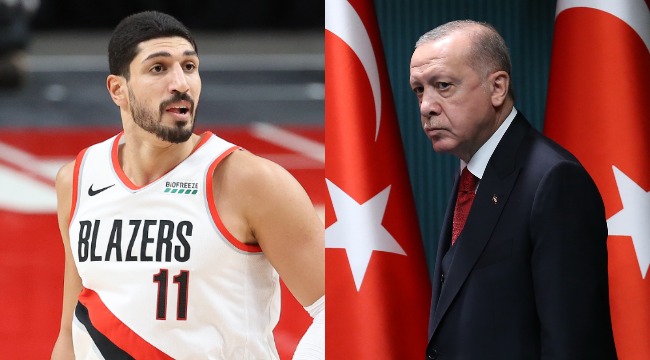 I don’t think I’m telling tales out of school here when I say America is a multi-layered shit sandwich at the moment. (Should I tweet that and conflate Twitter activism with real activism so I can feel better about my position while also getting the positive reinforcement of people just like me?) Decisions, decisions.

But perspective is a choice and there’s no better indicator of that than the nightmare Enes Kanter has to endure on top of his day job of NBA center.

As a refresher, the Turkish government revoked Kanter’s passport in 2017 and accused him and his family of terrorism in the wake of Kanter’s ongoing criticism of Turkish President Recep Tayyip Erdoğan, pegged as an autocratic leader who silences his opposition and who most recently backed Turkey’s top Muslim scholar’s claim that homosexuality “brings illness” and suggested it is the cause of the COVID-19 pandemic.

Last July, the Turkish Consulate in New York threatened the Islamic Center of Long Island, a mosque slated to have basketball camp hosted by Kanter. The event was canceled.

We spoke with Kanter on our Endless Hustle Podcast (solid episode today, folks) about his struggles since speaking out against Erdoğan—which include, but are not limited to—weekly death threats, secure FBI meetings, and the inability to put roots down anywhere.

From meetings with the FBI to being forced to live in a hotel room the ENTIRE SEASON, this is the price of courage.

“Everywhere you go there is a threat that anything could happen. I was actually talking to the team security today because two years ago I was staying at an apartment. Talking to my people, they said it’s not safe. So I’m moved to a hotel room because it’s more secure. You have a key to getting the card through and the security is everywhere and stuff.

Two years ago, I moved to an apartment to a hotel when we were on a road game the FBI came to my hotel room and set up this thing called a Panic Box. I had to sit down and have a conversation with the FBI and they said, ‘Whenever you feel uncomfortable, push that button and we’ll be there in two-to-three minutes.’

Today I had a conversation with team security again so they are going to come and set up that thing again in my room. So right now, the whole season, I’ll be in a hotel room.

Obviously it’s tough. It’s not easy when you’re talking against a dictatorship and you get death threats almost every week. Obviously affecting me and my family, but the one thing you need to do man is this affects millions of people so you got to do that.

I’m not really allowed to get a house because it’s really easy to get into or they can really reach out to me super easy. Apartments are safe, but they don’t really feel too comfortable, so hotels are the best way.”

If I have an argument with my lady in the morning, my entire day is a bit grayer. Enes lives every day in a heavy security budget hotel room under constant fear of retaliation with no familial support system. And he has a decently demanding day job.

Perspective is a choice.

And I chose to do something about it. #BeTheChange

Tune into our entire fascinating interview with Kanter below. We also discuss the weirdest things about America, Russell Westbrook (the person), the current state of the NBA, and much more.