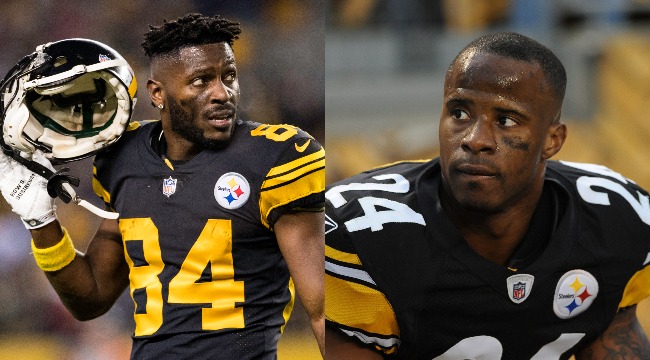 If the Football Gods could get one mulligan, they’d go back and put Larry Fitzgerald’s head on Antonio Brown’s body and see to it that all Brown’s hotel rooms are located on the ground floor for safe measure.

But this is a pipe dream, and in the real world Brown’s head is making everyone forget that for the span of two Presidential terms, AB was one of the best football players on the planet.

Steeler great Ike Taylor had already won two Super Bowls with the Steelers before AB arrived in 2010 and had front row seats to the rise and fall of one of the game’s biggest pariah’s.

Ike joined our Endless Hustle Podcast this week to speak about his five seasons sharing a locker room with Antonio Brown and why he regrets his handling of the up-and-coming star.

2x Super Bowl champ & career Steeler @Ike_SwagginU says his biggest regret was letting a lot of things slide with Antonio Brown after realizing he was a 'special' talent.

“I had a talk with Troy and we kind of said to each other, ‘You know, as his teammates, that was our fault.’ We let a lot of stuff fly that’s building up to how AB was acting instead of really grooming AB into what we knew he could be off the field. Because when you saw him in practice and you went against him in practice it was like, ‘Damn this dude is special.’

Picture this — Mike Wallace, Santonio Holmes, Hines Ward, Emmanuel Sanders, but everyone knew AB was the guy. You saw that from day one, like, this dude is special. This dude is real good.

And as a teammate, if there was something I would have done differently, I probably would have tried to do more to sit down and talk to him. It’s just hard to see from afar a young man who probably six years out of his career was probably the best player in the NFL. Consistently. In a six year span, there was nobody better than AB at receiver.

But when you think the NFL needs you, the NFL is going to prove you wrong everyday. We’ve been dealing with AB for the longest. It’s a young man’s sport. When you die, the NFL will be going on forever, so don’t you ever forget that. That’s what AB’s starting to see. Out of sight, out of mind. Thank God the GOAT likes him that much…we’ll see how this part ends, but AB gotta get back to Antonio Brown.

Those Pittsburgh teams in the early 10s were stacked with alphas: Hines Ward, Troy Polamalu, James Harrison, Big Ben Emmanuel Sanders, Ike Taylor, Mike Wallace. It’s a damn blessing AB was drafted by that team as opposed to somewhere like Cleveland where Jake Delhomme would have been the guy in charge of keeping the train on the tracks.

Listen to our entire interview with the wise Ike Taylor below. We talk about his decade-long NFL career, the exceptional talent of young receivers in the league today, the magic of Troy Polamalu, the ‘Camp Eyes’ phenomenon, & more!