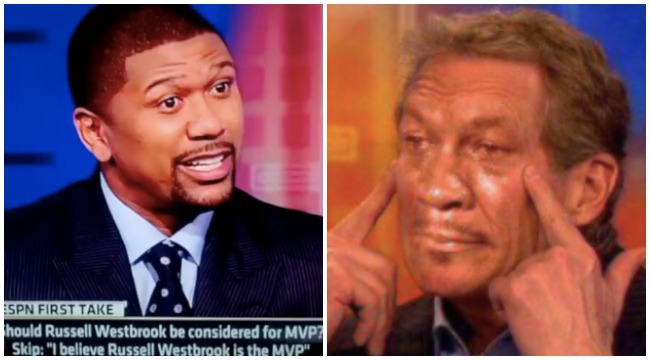 It was an unseasonably balmy night in Bristol, Connecticut on April 10, 2012.

Skip Bayless pulled up to the ESPN headquarters, likely parking in a handicapped spot, and strutted into the building with his signature unfounded machismo.

Just weeks earlier, Mr. Bayless had just been nominated for a Sports Emmy Award in the category of Outstanding Sports Personality, so the confidence in which he spewed his fiery takes had reached an apex.

Skip, former president of Northwestern’s Fellowship of Christian Athletes chapter, failed to heed to the enlightened words of  Proverbs 16:18.

Pride goeth before destruction, and an haughty spirit before a fall.

During an increasingly heated exchange with fellow First Take co-host and former NBA guard Jalen Rose over the merits of traditional positions in professional basketball, Skip made the near fatal flaw of challenging Rose’s basketball credentials.

This did not go well for Skip.

Eight years after the incident, we spoke with Jalen Rose on our Endless Hustle Podcast about the build-up, the fallout, and the reconciliation.

Skip has since moved on from the network and 3,000 miles away to Los Angeles, California where he specializes in trivializing athletes suffering from depression.

A tiger thou not change his stripes.