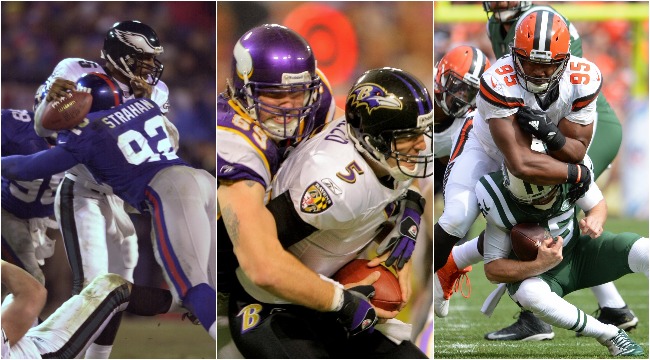 In the 38 years sacks have been registered an official statistic in the NFL, Michael Strahan’s mind-boggling 2001 campaign remains atop the mountain, thanks in part to a controversial sack on Brett Favre in the Giants season finale in which the Gunslinger just preemptively curled up in the fetal position.

But in the sack game, some are giveth, and some are taken away. It all comes out in the wash.

Jared Allen, who posted a league history second best 22 sacks in 2011 (tied with Mark Gastineau and Justin Houston), recently joined our Endless Hustle podcast to discuss whether any current NFL player has a shot at breaking Strahan’s two-decade enduring record.

His answer was not J.J. Watt, who’s posted 20.5 sacks twice. Or Aaron Donald who did it once. His answer was Myles Garrett, who at 25 years old recently became the first Browns player with three seasons of at least 10 sacks.

Michael Strahan's 22.5 sacks in 2001 is still an NFL record.@JaredAllen69's 22 in 2011 sits in 2nd, but Allen explains why @MylesLGarrett may be the only current player who has a shot at de-throning Strahan.

I think Myles Garrett has a shot but I mean, you can’t miss. I look back and everybody asked, ‘What was the difference between the 22 and the 12 or 15 sack years you had?’ I was like, ‘I didn’t miss.’

Not only do you have to piece together multiple sacks in a game, you have to continue to get sack after sack in multiple games in a row. I think that year I had like nine straight games with a sack to start the season. It’s hard. I don’t know if it’s doable.

I’ve seen a couple guys get close to it. Justin Houston was the latest to have 22. I think a guy like Myles Garrett can do it because he has that technique. And I’m not saying Aaron Donald isn’t — Aaron Donald is an absolute stud. He’s one of my favorite players. He’s a beast, he’s an old school player. But just coming from an interior position I think that’s going to be kind of hard to string 23 together.

But Myles Garrett has the ability. He’s a four down guy. He plays the run. He’s that big body. He’s a lot like Julius Peppers. Dude can run. He’s long. He’s streaky. You watch that dude and he jumps out and he puts things together.

He may be able to if he’s healthy, but other than that I think it will be a while before we see it because the RPO game is so hot right now it’s hard to get to the quarterback to begin with.”

Myles Garrett was getting this sack by any means necessary 😂

We had a blast with Jared Allen. Listen to our entire conversation with him below. We talk about his playing days, separating Johnny Knoxville’s sternum in Jackass 3, Dan Orlovsky running out of the back of the endzone, the legend of the mullet, and his professional curling career.