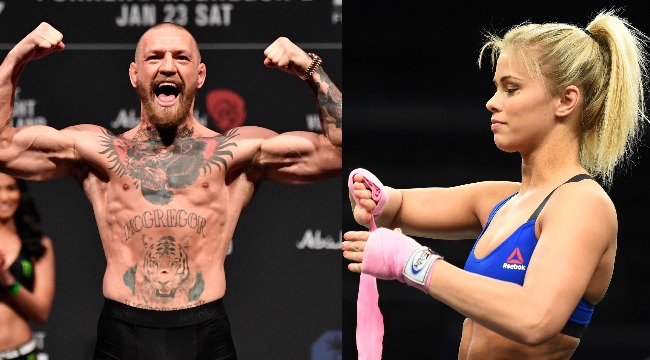 Congratulations, folks. You’ve officially made it to the greatest sports weekend thus far in 2021.

Between UFC 257 on Saturday night and the NFL Conference Championships eating up Sunday, I have formally gifted my wife a Hall Pass for 48 hours. I know, very progressive of me.

In the lead-up to Saturday night’s fight between Conor McGregor and Dustin Poirier, former UFC star turned Bare Knuckle FC fighter Paige VanZant joined our Endless Hustle Podcast presented by Boston Market and detailed how the Notorious paved the way for a generation of fighters trying to emulate his abilities both in and out of the octagon.

“I think he’s a genius. There were amazing stars in the MMA based on their capability and the way they competed in the octagon. There were a lot of people who were extremely successful. Georges St-Pierre is one that instantly comes to mind. He’s a huge recognizable name, but there’s nobody that’s done it like Conor McGregor to where he knew how to market himself. It doesn’t matter if he was winning or losing, he was the first one to get paid for who he is and he absolutely deserves everything he’s gotten. He’s worked extremely hard and it’s cool to see that there’s somebody like that. A frontrunner.

Now you can really see the personalities of all these other fighters coming through. Everyone’s trying to be the next Conor McGregor and walk like him and talk like him. I think no one will ever be able to have his originality.”

Paige recently joined Poirier’s American Top Team gym in Florida, so she was hesitant to give a prediction on the outcome of UFC 257 so as not to burn any bridges.

“This is going to be an awesome fight between two people who are obviously training extremely hard and they just want to show the world how good they are. It’s an exciting matchup and I’m just going to watch as a fan.”

I was pulling for McGregor, then I spent an hour listening to Dustin Poirier on Theo Von’s podcast and I can’t remember being more moved by an athlete’s mindset and humility. I will tune in as a fan as well.

.@DustinPoirier dropping Perspective will be my alarm clock every day of 2021 pic.twitter.com/qHS1cp0jhu

Listen to our entire interview with Paige below. We talk about her upcoming Bare Knuckle FC debut, creepy fan DMs, foot fetishes, dancing for the Portland Trail Blazers, and more!