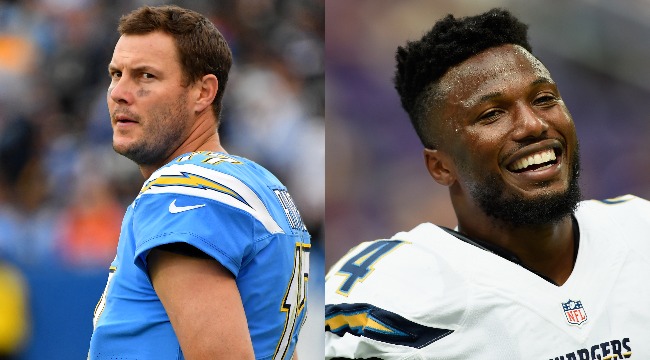 In the time it’s taken you to read this sentence, Philip Rivers has conceived another child.

Rivers’ live-in obstetrician rolled out of his guest bedroom for another routine child-birthing while Philip ferociously flips through the baby book to find a name they haven’t used.

For those scoring at home, how many is that? Not sure, I don’t clean the floors at M.I.T. and Robin Williams isn’t my shrink.

(Anna has yet to be conceived in the photo below)

Philip Rivers through the eyes of his children » https://t.co/5z8KzfWGph pic.twitter.com/FfX65EqBIX

Rivers has gone on record calling his wife Tiffany, the “most selfless person in the world” for her efforts over the past two decades, and the sports world has long been baffled by how a man is capable of juggling an NFL playbook while also compartmentalizing all of his children’s names.

On our Endless Hustle podcast presented by Boston Market, we spoke with former Pro Bowl cornerback Brandon Flowers, a father of two who spent three seasons with Rivers in San Diego, about the quarterback’s undying commitment to his Christian faith and unique perspective on raising youngsters.

At the time of this writing, Philip Rivers has 9 children.

How is it possible to stay sane? Ex-teammate & Pro Bowler @BFlowers24 reveals the advice his QB gave him after the birth of his 1st

When I introduced the idea that it was never about the money, it’s about the bandwidth, Flowers let us in on Rivers’ key to progeny prosperity.

“I did ask him that. I said, ‘Phil, I have one daughter right now. She’s driving me crazy. I have to be engaged with her, it’s always Daddy this, Daddy that. You have seven.’

Phil’s like, ‘Man before you know it, every kid is taking care of the other kid. Every kid wants to be like another kid, so they’re all just playing with each other, and I’m sitting around like, ‘Does anyone want to be around daddy?’ Each kid is another kid’s best friend, so they’re all enjoying each other so that’s how he gets to balance his out a little bit.”

Moral of the story: Parenting is a breeze when your 11 year old is raising your 9 year old.

FOX really snuck in the number of Philip Rivers children in this graphic and thought no one would notice pic.twitter.com/VBy8U1FubM

Check out our entire interview with the charismatic Brandon Flowers below. We also talk to a guy named DeSean Jackson who’s been a decent football player