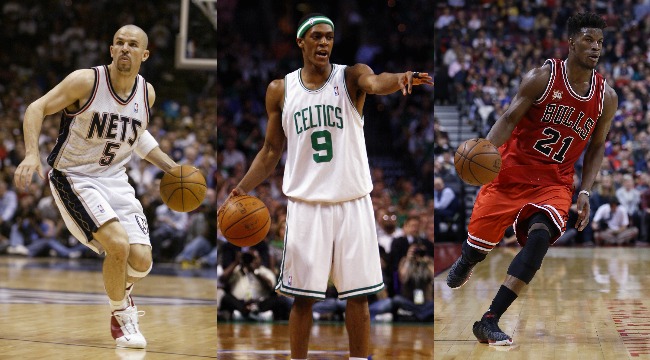 Rondo’s eccentricities and basketball IQ have been fodder for many-a-thinkpiece during his 15-year NBA career—from his perfect Connect Four record to his intimate familiarity with the opposing team’s playbook.

The word Genius has been attached to Rondo’s name often, so we wanted to understand first-hand if this moniker was just a manifestation of the media.

And who better to ask than the White Mamba himself, Brian Scalabrine.

THE GENIUS OF RAJON RONDO

"When @DocRivers said @RajonRondo was the smartest player he's ever coached, it's really not that close. And I played with Jason Kidd." 👀

“He’s so smart he sees the game on another level.

You know, the game of basketball is like, go to the well is dry, feed the pig, a guy has a hot hand you keep milking that, right?

Rondo takes a snapshot of every play you run and he wonders how a guy is going to guard it. You ask him, ‘Why are we not running this play?’ He’s like, ‘I’m saving that for right around the 4-minute mark in the fourth quarter because they won’t be able to make an adjustment. This is how we’re going to win this game tonight.’

So when Doc [Rivers] said he’s the smartest player he’s ever coached, it’s really not that close to be honest with you. And I played with Jason Kidd.

He’s so highly intelligent that sometimes I can see how he’s frustrated with players that aren’t on his level at all…he was the most unique player I’ve ever played with.”

Scal’s comments reinforce ones made by Tyronn Lue in March when he claimed that Rondo’s basketball IQ is on par with LeBron’s.

Tyronn Lue on Rajon Rondo, who Lue adds is there with LeBron and Chris Paul in terms of basketball IQ. #Clippers pic.twitter.com/Y7zW0lXJwQ

Rajon Rondo got so many dudes with that fake behind-the-back pass 🤦🏽‍♂️ pic.twitter.com/YidAGgoPeq

Check out our full interview with Scal below and go drink some delicious Scal’s Vodka Lemonade!