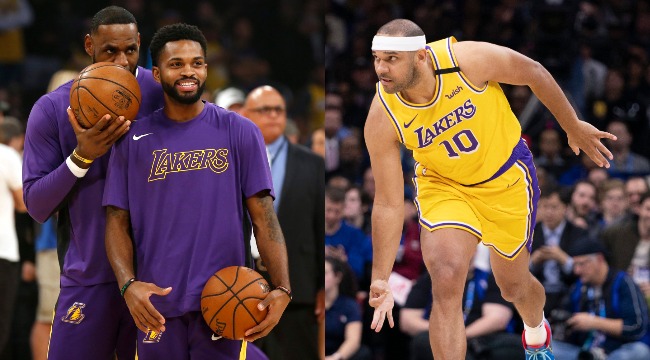 I’m beginning to think that Jared Dudley may be the first player in NBA history to back into the Hall of Fame without ever making an All-Star game, averaging more than 12.7 points per game, and playing a total of 31 minutes in 21 playoff games.

From an NBA Twitter perspective, Dudley is an easy target—the hyper-enthusiastic, slightly doughy veteran who authored a book about his NBA championship season before the rings could even be engraved.

The World: We would really appreciate the quick and effective distribution of vaccines.

The Universe: Here is a book by Lakers 15th man Jared Dudley.

From an organizational perspective, Dagger Dudz is a $2.5 million bargain, a Udonis Haslem-type, a fountain of wisdom who never takes his finger off the emotional pulse of the team. A player who is #15 off the bench, but #1 in your heart.

Ex-Lakers teammate @troydaniels on why Dudz is one of the best unsung heroes in the game.

“There are a lot of vets who don’t have jobs right now, but I think vets are very important on a team. Jared Dudley is one of the greatest vets I’ve been around. There’s not really too many young guys on the Lakers but he still has a job with the Lakers because he’s a locker room guy. He brings everybody together. He understands the business of basketball. He understands the game of basketball. Very vocal. Can explain it. Can articulate very well. He’s good at all those things, so he has a job.

Paul George: God bless you Jared Dudley. I don't know what it is, dudes love throwing my name in stuff. But God bless you, Jared.

When the NBA accepts my Change.org proposal to create a wing in the Hall for bench players, Dudz will be on the very first ballot.

Check out our entire interview with the charismatic Troy Daniels below. We chat about: