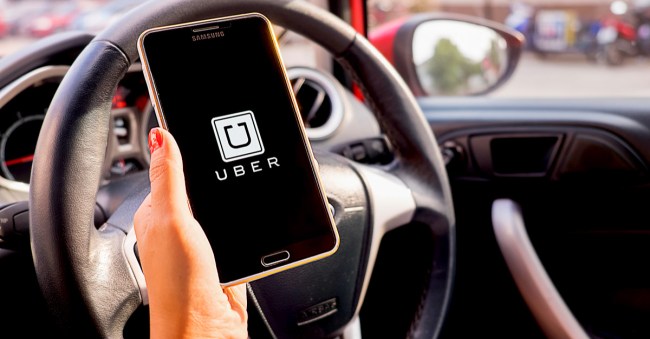 Just when we thought Uber was a horrible service that charges people $14,000 for 5-mile rides an Uber driver in Florida goes and does something so great that she TOTALLY REDEEMS the company.

Here’s how the story goes…

An Uber driver, who goes by @vickto_willy on Twitter, picked up a female passenger. When she asked the passenger how her day was going the passenger broke down and admitted that she had flown from Texas to Florida to meet a guy and he ditched her. What @vickto_willy did next was incredible.

I was driving for uber today & this girl gets in the car. I ask her hows her day been & she breaks down. She tells me that she flew alone from Texas to see a guy & he abandoned her so I did what I would want someone to do for me. I invited her to hang out with my friends & I.

Like y’all don’t understand. This girl was near her breaking point. She thought she could trust this guy. She’s been alone at her hotel since Thursday. My friends and I are about to show her a bomb time so that her trip isn’t completely pointless.

First, the driver offered to go beat the dude’s sorry ass. “…she politely declined and said that karma will get him…like sis karma might get him but my hands are faster.” Awesome.

Update: My friends and I offered to jump the guy for her but she politely declined and said that karma will get him…like sis karma might get him but my hands are faster pic.twitter.com/exkr3ep8Yz

Then she found out from the passenger that the guy claimed to be a Florida State football player, but things were starting to sound a bit shady…

She just told us that when he came to her hotel, he asked her where he could park his car so no one would see it. He claim since he plays for FSU his coach would be mad if he knew he was there. Likeeee I’m pissed! He clearly hiding something. What y’all think? pic.twitter.com/4ow9dDdVC6

At that point, she decided to take her passenger, whose name is Leah, out partying, “changing her life and getting her lit.”

Update: Her name is Leah. She’s super sweet and charming and I’m about to show her a good time. Taking her to a pregame, already got her listening to Florida music like Ice Berg and Major Nine. Changing her life and getting her lit. pic.twitter.com/L3ncXSOksO

At that point the alcohol started to hit and @vickto_willy realized that with great power comes great responsibility.

Update: She stage dived. I have no words. This has become a responsibility greater than I could have ever imagined. She’s heart broken. Her emotions are everywhere and the alcohol has enhanced that. I don’t regret it. At least she’s having fun.

She then tweeted, “Update: His name is [redacted]. She standing outside the club. I tried to tell her not to call. Based on every excuse he’s used to avoid her, he either has a girlfriend or is a sociopath. He literally told her ‘I gotta leave cause I need to put lotion on my face’ what in the lies?”

So now she’s fully invested in Leah’s situation and decides to take things into her own hands.

Update: He tried his lies on me but I hit him with receipts. Talking about he can’t be around her because he’s a student athlete. I said how does that matter when you didn’t even get in the game this season 🤔 like please give a better excuse. pic.twitter.com/W0IZS0t3mk

Then she put him on blast, tweeting a picture of his Twitter and writing, “Update: I just told him to watch his back because I was going to tell my twitter family his @. Anyone know this prick?? He claims to be a student athlete for Florida State. So good that he thinks he can treat girls however he wants without it backfiring.”

Naturally, Twitter then went to work and she got loads of replies. None of them good for him.

“I know him. He went to my high school. He doesn’t even go to FSU, he goes to the community college,” DM’d another.

With the mystery of the ditching guy solved, she then dropped Leah off at her hotel, tweeting, “The night was wild but it was worth it. Glad to have met my new friend, Leah.”

Update: She’s safely back at her hotel. I have to take all my other friends home. But I promised to check on her in the morning and drive her to the airport to catch her flight. The night was wild but it was worth it. Glad to have met my new friend, Leah💛. pic.twitter.com/KMfULJWnq2

In the morning she was back to give Leah a ride to the airport for her trip back to Texas.

She is on her way home. Texas, take care of her 💛 pic.twitter.com/nM5GIh3Kqd