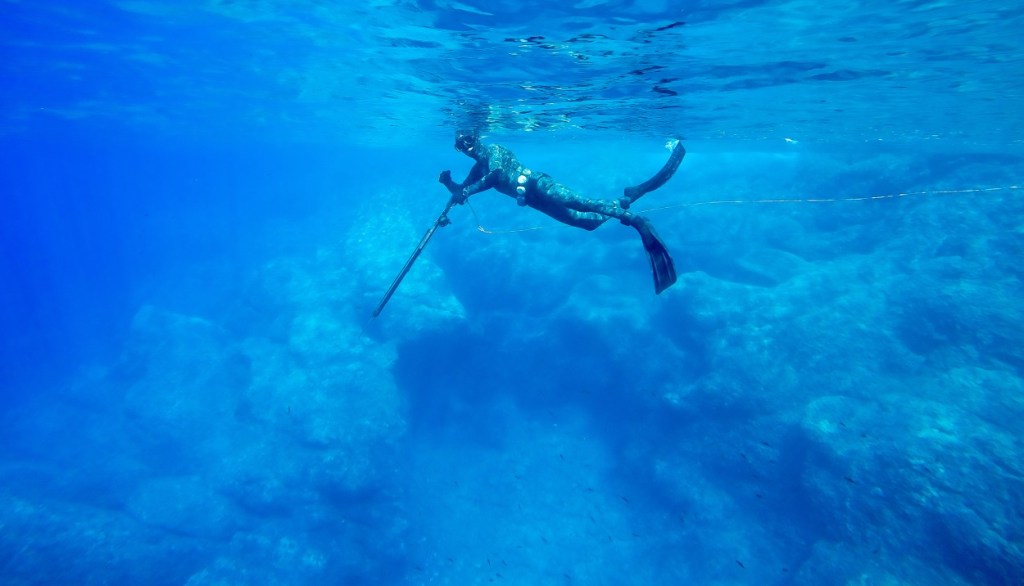 This species of snapper grows to gargantuan sizes and they fight like a raging bull that just got stung by a wasp. To top it off, they have some of the gnarliest teeth out there with huge protruding fangs.

The current spearfishing world record for Cubera Snapper using a speargun is 122.4 pounds. That world record was set by Tarsio Storace in Brazil on July 24, 2006.

As a reference point, the spearfishing Cubera Snapper world record for Sling/Polespear is a 130.0 pound fish caught in The Bahamas by Luke Maillis in 2018. And the overall IGFA Fishing World Record for Atlantic Cubera Snapper caught using a rod and reel is 124 pounds, 12oz (Garden Bank, Louisiana in 2007). While the Pacifica Cubera Snapper record is a 78 lb 12 oz caught in Costa Rica.

Interestingly, the Texas state fishing record for Cubera Snapper is actually 151 pounds according to the Star Telegram. But that fish was caught using a handline in 1984 so it didn’t qualify for the rod-and-reel IGFA fishing world records or the spearfishing world records.

An absolute UNIT of a fish

Braden Sherron caught his record-setting Cubera Snapper on June 3rd and then took it back to Port Aransas Fishermans Wharf to have it weighed on a certified scale. That’s when it set in that he’d shot a fish that demolished the existing records.

And the great thing about a marina like that is there are lots of cameras around. So they were able to snap some jaw-dropping photos of his world record Cubera Snapper. Check ’em out:

Just imagine for a second that you are out spearfishing in DEEP water. A massive and potential new fishing world record-sized Cubera Snapper swims past you. You’re able to get a shot off with your speargun. Do you think you could then swim back up with 137-pounds of dead weight falling towards the surface?

Even if you had assistance from some flotation devices attached to your line that’s a LOT of pressure on the line. The logistics of catching a fish this large when spearfishing are wild. The currents can change swiftly and powerfully.

Braden Sherron has a YouTube channel where he regularly posts videos of his spearfishing adventures. He hasn’t yet uploaded a video of this world record Cubera Snapper but it seems like only a matter of time until we get to see some incredible footage of his catch.

In the meantime, if you want to subscribe to his channel for more spearfishing videos you can find it here. American Red Snapper season kicked off and is HOT in Port Aransas, Texas. So the focus of the fishing world in that area has definitely shifted to Reds from Cuberas, for now…