20 Years Ago, Randy Johnson Blew Up A Bird With A Fastball; Those Who Were There Take A Look Back 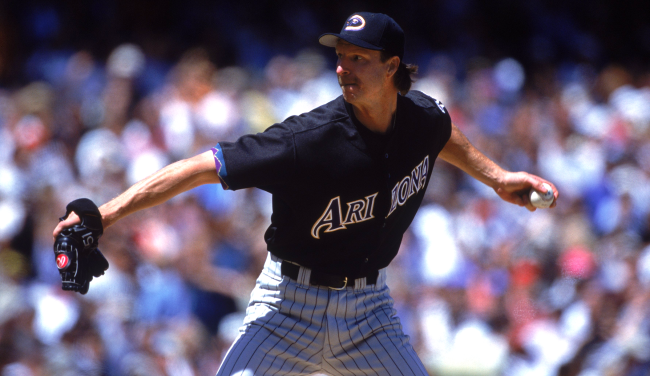 March 24, 2001. A day that will live in infamy. At least for Major League Baseball Hall of Famer Randy Johnson, it will.

That’s right. On Wednesday it will have been 20 years since The Big Unit, then playing for the Arizona Diamondbacks was pitching in a spring training game against the San Francisco Giants at Tucson Electric Park, killed a bird with a fastball.

“It was an explosion,” said Johnson’s catcher at the time Rod Barajas. “I don’t know any other way to put it.”

Related: Randy Johnson Used To Keep A Bag Of Baseballs By His Bed To Throw At Robbers

Naturally, PETA was quick to threaten pressing charges against Johnson after he hit the bird – something he had zero control over happening – and actually ended up filing a lawsuit against him.

“I was considered a bird killer,” Johnson said in a Fox Sports Arizona interview. “What became kind of funny, actually became a very serious moment.”

What many fans don’t know is that the game wasn’t even broadcast on TV. The only known video of Johnson destroying the bird with a pitch was taken by Diamondbacks video coordinator Jim Currigan.

Johnson, who used to bristle at talk about the bird incident, now actually has a little fun with it, using a dead bird as the logo for his photography business.

So, as baseball fans do every year around this time of year, people are taking a look back and commemorating the ultra bizarre event.

One of those people is Zach Buchanan of The Athletic, who spoke to several people who were actually in attendance that day in Tuscon and witnessed the carnage.

“I saw the bird coming across. But I didn’t think it’d get in the way because of the action that was going on,” recalled Eddie Rodriguez, then the Diamondbacks first base coach. “But it just kept going and going and going. All you heard was ‘poof.'”

Giants outfielder Calvin Murray, who was at the dish went it all went down, remembered, “My initial reaction was the ball had exploded. I thought it was a practical joke or something, that he threw some tricked-up exploding baseball. It just took a minute for it to process.”

“I look in front of me and there’s feathers falling right in front of me,” said Barajas. “I had no idea what had happened. The runners on base could have run all the way around before I found that baseball.”

The umpire actually, as is the rule in case of something as unlikely as this happening, called it a no pitch. And it was unlikely.

“It takes 0.4 seconds for the ball to get to home plate out of Randy’s hand, because he reaches out so far. What were the odds of a bird flying by at the same time the ball was getting there?” asked Greg Swindell, a Diamondbacks pitcher at the time.

Murray was just glad he didn’t swing at the pitch.

“Randy has had people swing at sliders that hit them before, but it would have been really bad if I had swung at a pitch that never got there.”

The bird was eventually picked up off the field by noted outdoorsman Jeff Kent with his bare hands because, according to Rodriguez, “Nobody wanted to touch it at first.”

“I think about half the people on the first-base side passed out,” joked Mike Swanson, then the Diamondbacks PR director.

In the video, Barajas is seen immediately heading for the hills.

“I’m a California boy. I’m not a hunter. I don’t deal with dead birds. That just freaks me out,” he said about the moment.

As for the infamous baseball that took out the bird, no one has any idea what happened to it.

“They probably would have authenticated it if it happened today,” said Glenn Sherlock, who was the Diamondbacks bullpen coach in 2001.

Of that there is little doubt.

Read the entire entertaining discussion over at The Athletic.