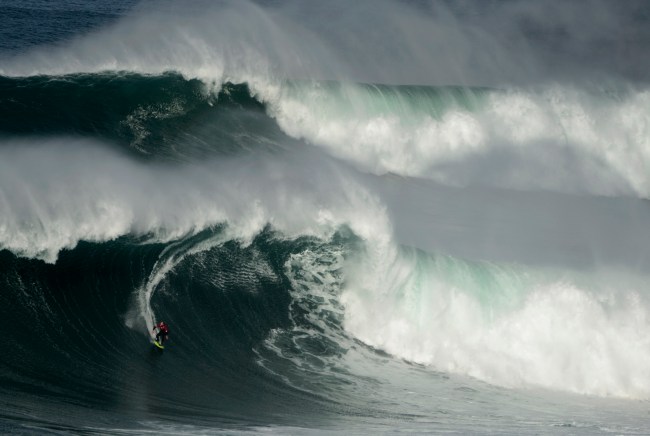 The 2020 Nazaré Tow Surfing Challenge took place earlier this month with the best Big Wave surfers on the planet descending upon the tiny fishing village of Nazaré, Portugal, roughly halfway between Porto and Lisbon.

When the conditions are right, Nazaré produces the biggest surfable wave on the planet and what makes it even cooler is the wave breaks right offshore so spectators can stand on the cliffside and watch surfers charge waves the size of office buildings. This Instagram clip shows what makes this the biggest break on the planet when the conditions align:

Nobody was surprised when Hawaii’s Kai Lenny won the 2020 Nazaré Big Wave Surfing Challenge. He’s at the top of the sport right now and shreds monster waves in a way that most surfers would never even dream of attempting. This year’s scariest moment came when Portugal‘s Alex Botelho was knocked unconscious and had to be rescued and rushed to the hospital for treatment. He was later announced as conscious and being kept for monitoring.

The World Surf League released this recap of the action on their YouTube channel and it’s a gorgeous look at all the best waves from the event. It was streamed live but I only caught a small portion of it since they started on Portuguese time so this was a cool way to catch up on the most absurd waves these guys surfed:

There aren’t any events on the Men’s Big Wave schedule in the near future which is a shame but I’ll be sure to keep you gentlemen in the know the next time one of these global events gets put on the calendar.