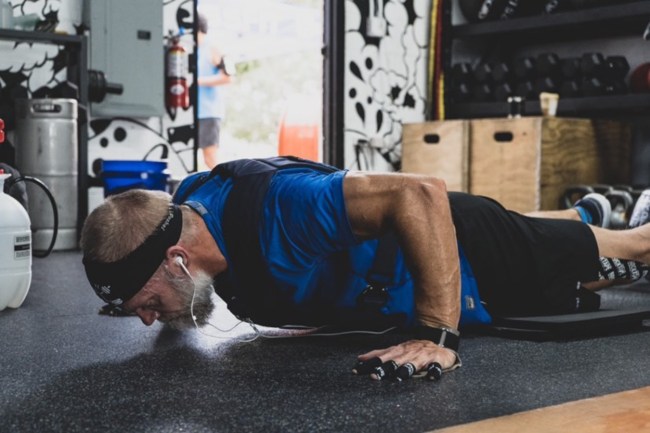 It has been a popular year for the Murph Workout record. For anyone out there who needs a quick refresher on the ‘Murph’, it is a common CrossFit and military workout created to honor former Navy SEAL officer Michael P. Murphy who received the Medal of Honor ‘for his actions during the War in Afghanistan’ and he was the first member of the Navy to receive the Medal of Honor since the Vietnam War. The workout consists of ‘a 1-mile run, 100 pull-ups, 200 push-ups, 300 air squats, and a final 1-mile run.’

Now, there’s a new champ and he’s a 41-year-old father of two in Orlando who just broke the record for the most Murph workouts in 24 hours with a full 17 Murphs, just edging out Tyler Friese’s record from July.

Brandon Westover is a Fitness Coach and Endurance Athlete who also works in IT Security. His initial plan was to complete Murphs in 24 hours. An insanely ambitious goal when you consider the record was just 16 Murphs a few months ago. But he was pretty damn confident he could make it to 19 and he had sponsors BearKomplex and RX+Plate in his corner helping him achieve his goal. He’d previously gone on a 50-mile run around Orland: and it was on Memorial Day Weekend when the idea of breaking the record first planted its seed:

During Memorial Day Weekend, I did 2 Murph workouts in a row basically on a dare right before COVID hit and thought, “I think I could do this for a long time, I wonder what the record is?” I looked it up and at that time it was 13 and I thought to myself, I am positive I can break that (with half my friends agreeing and half the others saying I was crazy for even considering). Shortly after that, someone got 16 and I had already estimated that I could do close to 19 based on a few trial runs I had done. One of those trial runs, I completed 8 rounds of Murph in 7hr50mins (surely a record) – so I was pretty sure I could break the 24HR record. It then got pushed to 16.75 and that really didn’t mean much to me as I was shooting for 19. 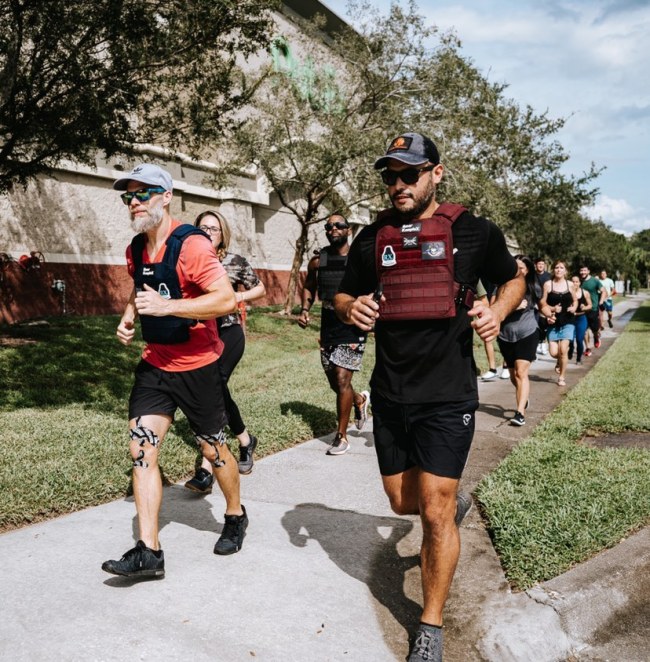 From there, he set the goal of breaking the record on his 41st birthday in September but the date had to be flexed a few days so the gym could accommodate the event. I don’t know when the last time any of you gentlemen have spent time in Florida during September but the ‘Feels Like’ temperature is still getting over 100-degrees Every. Single. Day. so he was not only going to try and smash one of the most difficult records out there he was planning on doing it in excruciatingly hot conditions.

He reached out to BroBible about his record-setting day to tell me about his attempt and how it all went down, what his strategy was, how he was feeling on the big day. Here’s

I arrived at the gym at 4PM and it read 98 degrees in my car as I hopped out. All of my test runs were done either really late at night or very early in the morning. I knew it would change a little bit, but I very much under-estimated the effect.

I started at 5pm EST on Saturday and within 4 rounds that took me 5hrs and 22min (way slower than I normally do them) – I had already thrown up 4 times and was experiencing a first-ever heat exhaustion. I would be lying if I didn’t want to quit because I was having a terrible time consuming any calories that I had tested many times and was even having issues downing liquids. If it had not been for a large event pre-planned for this, I would’ve just stopped and re-done it at a better date/time – but this was not meant to be that day. In my mind, I told myself to quit MANY times. This is a dark place that you have to experience for yourself to truly understand what it is like to want something so badly, but your other side of the brain is telling you to just quit. Many ultra/endurance athletes have experienced this and it takes strong willpower to not give in.

I dug in and with the help of fellow members constantly rooting me on with positive feedback and running with me to keep me company, I continuously pushed through round after round. On every practice round I ever did (up to 10 rds), I never experienced any issues with pushups or pullups and as with any endurance type of event – you can’t predict anything. I started getting a severe tennis elbow type of pain in round 8 that forced me to adjust my pushups in a very odd one arm much further out than other to change the angle and this allowed to continue on without being forced to quit yet again. It slowed me down quite a bit though because I usually pump out 10 pushups in 10 secs and this took away my strongest movement. 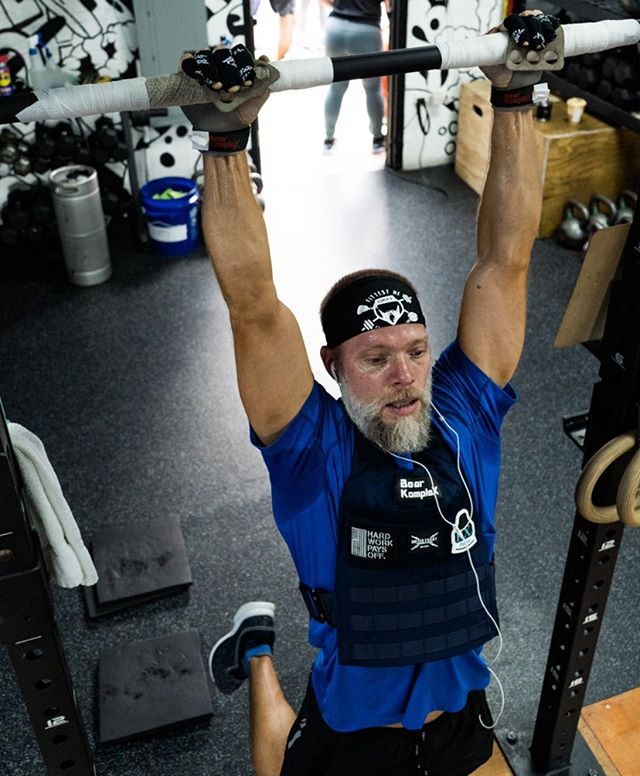 Heat exhaustion is real. I can’t say that I’ve ever experienced it as an adult but as a kid growing up in Florida it was something that constantly plagued me. I wish I was joking. But I fainted no less than twice at summer camp as a kid and not only was it wildly embarrassing around the other kids but it felt like my skin was white static from a TV, my ears would be ringing, and boom, I’d hit the ground to wake up somewhere unfamiliar. Not great. So I definitely sympathize with him on that.

His goal was 19+ Murphs but did he make it???? It sounds like it was easier going at night when the weather was more agreeable but after starting the attempt with a bout of heat exhaustion he was fighting an uphill battle.

The night rounds went fairly easily because it was somewhat cool out (probably still in the 80s). I still was about 70% for most of this event after the heat exhaustion (I still had not consumed any solid food at this point), but I knew my original estimation of 19+ would still allow me to get at least 17. I am not aware of what the weather was like for other folks who have done this record before, but the weather for my 24 hours I would put up against anyone attempting because it was in the high 90s when I started and back in 90s again the next day with no cloud/rain the second the sun came back up in the morning. For those reading, choose a better starting time and more importantly – a better time of year for weather!

When I was finishing round 14, I already knew that I was going to break the record as long as nothing crazy happened. I then went to the restroom and started showing early signs of the start of Rhabdo (something I was well aware of having done Ultras, etc before). As much as pained me to do it, it was at this time that I spoke with my crew and we agreed that I would walk from then on to finish the 17, but I would not do anymore after and just get an IV to fully rehydrate. I did complete the 17 with 1hr and 28mins remaining with many of our gym members and friends/family rooting me on and just went straight to getting an IV — so caution to anyone who is doing this to make sure you are able to hydrate or you could really run into problems. My quads were sore for several days after the event, but surprisingly my chest/arms/back it was barely noticeable that I had done anything extreme. 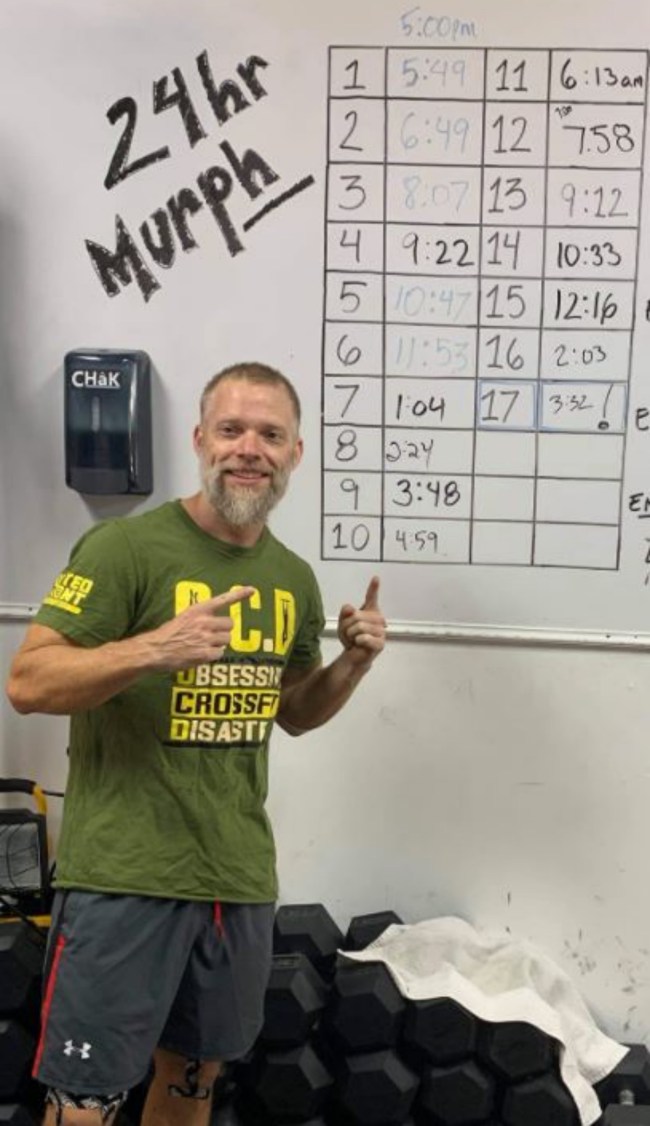 Not to be lost in any of this is the guy who broke the record three months ago was seventeen. Brandon Westover just broke this record with 17 complete Murph workouts in 24 hours at the age of 41-years-old.

This year’s constant breaking of the 24-Hour Murph Workout record feels like we’re headed towards a day in the future where all of these ‘super’ endurance athletes get together for 24 hours and try to break the record whilst competing against one another. Perhaps on Guinness World Record Day. I think the new Guinness World Records book actually came out today, coincidentally, but I’m getting sidetracked here.

Before breaking the 24-Hour Murph Record, Brandon told his gym ‘everything happens for a reason and being tested with those obstacles was what was meant to be’. He says the hardest part for him was the random injuries that plagued him throughout this record-setting achievement, something that someone much younger might not have to contend with. On that front I can 100% sympathize. I’ve torn my meniscus twice and go through bouts where I can barely put bodyweight on my right leg and other times when I can comfortably run 8+ miles without collapsing.

He’s now on the hunt for his next challenge.

You can find Brandon on Instagram at @fittestmewithcoachb to learn more about his record-setting 24-hour achievement. All images in this article were provided by Brandon Westover courtesy of @_kophotogrphy_ Instgram</em<.