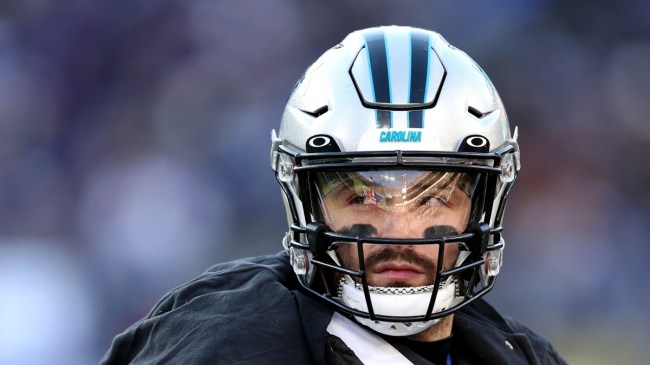 The Carolina Panthers made a shocking decision on Monday after releasing Baker Mayfield from the roster. Considering Jimmy Garoppolo just fell to a season-ending injury, many are speculating the San Francisco 49ers are going to sign Mayfield. However, the team is an absolute long shot at singing the veteran quarterback.

Baker Mayfield is set to hit the waiver wire. If he clears it, then he can sign with anybody. Watching Garoppolo go down hurts the 49ers’ chances of making a deep run in the playoffs. You’d think they’d be all over signing the former Panthers quarterback. Even so, according to Tom Pelissero, San Francisco is 24th in waiver priority.

On top of that, the 49ers aren’t the only quarterback-hungry team in the league right now. Looking at that list, you can argue that five teams within the top 10 could put in a claim for Baker Mayfield. So, despite the rumors heating up for San Francisco, it’s important to note they’re a long shot in signing him.

The Jimmy Garoppolo injury definitely hinders the 49ers’ Super Bowl hopes. Even so, they have a ridiculously stacked roster. At the very least, Brock Purdy has the best team possible around him to succeed.

With that said, keep an eye on the 49ers, as they’re technically still in the mix to sign another quarterback to at least back up Brock Purdy. Meanwhile, Baker Mayfield’s football career becomes incredibly bleak as he’s up for grabs on the waiver wire.