Group Of 49ers Players Troll Kyle Shanahan, Let Him Know They Were Still Alive On Sunday 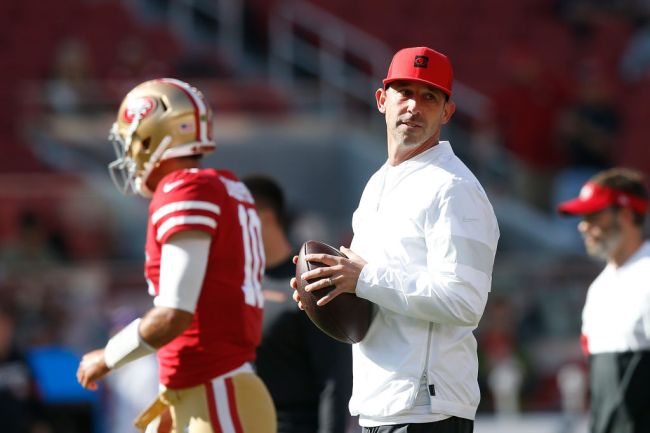 Ahead of last week’s NFL Draft, 49ers head coach Kyle Shanahan made an interesting comment in regards to Jimmy Garoppolo’s future in San Francisco and after the conclusion of the draft a group of his players trolled him about his choice of words.

Garoppolo has been in the center of trade talks all offseason and those talks hit all-new levels leading up to the draft with the 49ers set to draft a quarterback with the third-overall pick, which they did in selecting Trey Lance. A few days prior to the pick, Shanahan was asked specifically if Garoppolo would be on the team’s roster come Sunday, and he went a little dark with his answer.

When Sunday rolled around, a number of 49ers players decided to have some fun with their head coach and let him know that they indeed did survive until Sunday.

This is tremendous. I’m told a group of #49ers players called Kyle Shanahan today to let him know they survived until Sunday. So good.

As for Shanahan’s strange comment about death and surviving until Sunday, he clarified what he meant by it a couple of days later and admitted he didn’t choose his words too wisely.

“First of all, I’m glad you asked about Jimmy. I totally bombed that on Monday,” Shanahan told reporters. “I hated how that came off. I talked to Jimmy about it right away. I didn’t realize that when I did it. A person I have a relationship with who sometimes when he asks me what I think is a silly question, sometimes I mess with him back, and that’s kind of what I was doing. That was between me and that guy, had nothing to do with Jimmy when I said, I didn’t know if we’d be alive on Sunday.

As it stands now, it looks like Garoppolo will remain on the 49ers roster for the time being and perhaps be the starter ahead of Lance who may need a season or two as a No. 2 QB to develop.