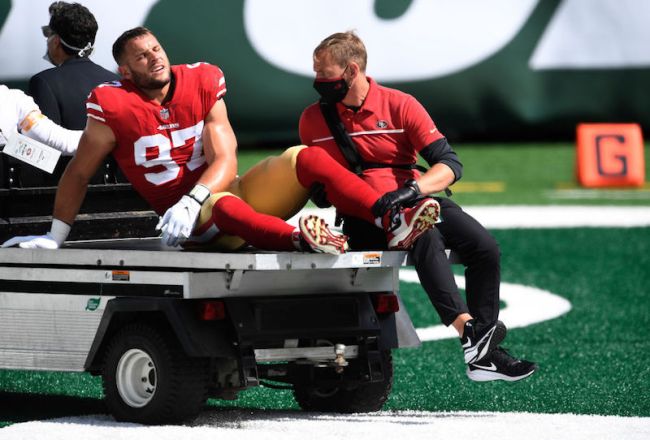 Injuries piled up around the NFL in week two and no team was hit as hard as the San Francisco 49ers.

The team lost Nick Bosa to a possible season-ending injury. Two plays later, fellow defensive lineman Solomon Thomas suffered a knee injury that forced him out for the game.

Jimmy Garoppolo left the game in the second half with a high-ankle sprain and the quarterback will most likely miss next week’s game against the Giants. The game is being played at MetLife Stadium and the 49ers are already worried about the possible injuries next week playing on such a potentially dangerous surface.

According to 49ers coach Kyle Shanahan, players were worried before the game started due to the “stickiness” of the field.

#49ers coach Kyle Shanahan said players were discussing how "sticky" the artificial surface was at MetLife Stadium today. Said it was something they discussed throughout the game. Shanahan said "unfortunately" Niners have to play there again next week.

Defensive lineman Arik Armstead was a little blunt in his critique of the field.

MetLife Stadium was equipped with a new synthetic field turf in the offseason.

Last Monday, the Giants and Steelers played the first game on the new field. The Steelers had three players get hurt.