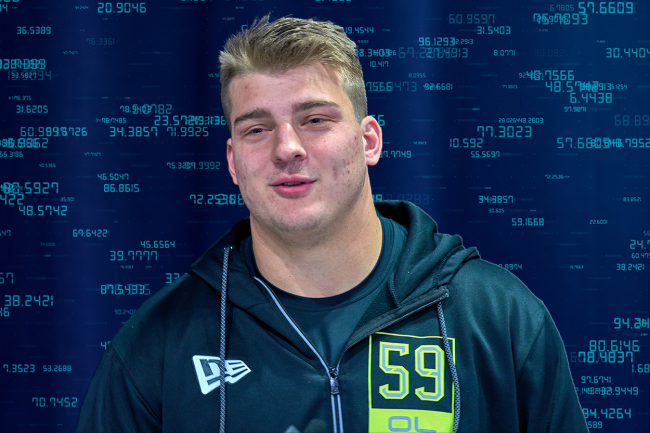 Despite the lack of recognition, he deserves to be recognized.

Zakelj started all five years for the Rams and was a three-time First-team All-Patriot League player. He stands 6-foot-5, 325 pounds and quickly became a late-round name to watch as a player who could blossom into a starter on the next level.

His strong tape earned him an invite to the Senior Bowl.

And his strong performance at the Senior Bowl earned him an invite to the NFL Combine.

Zakelj is considered a diamond in the rough and was one of the hidden gems in the NFL Draft. He reported to training camp earlier this month and is getting in his first work with the 49ers on the highest level in football.

While Zakelj is slated for a long, successful career in the NFL, he has a business analytics degree from Fordham to fall back on. Not bad.

As someone who is analytically-driven, Zakelj is a huge numbers nerd. He is also a big baseball fan. Those two things go hand-in-hand.

While speaking to reporters last week, Nick Zakelj proceeded to make quite a few fans in the San Francisco area by talking about Barry Bonds.

He totally geeked out over the sheer insanity of Bonds’ career. Specifically, the 2004 season.

“Looking at Barry Bonds’ Baseball Reference page is probably one of my favorite sites. Even just that 2004 season, it’s so crazy.” pic.twitter.com/l9jDaoCurh

Growing up, looking at websites with deep statistical breakdowns readily available helped Zakelj grow a passion for analytics. Of the numbers that stand out across all sports, Bonds’ 2004 season is certainly awe-inspiring.

Over the course of what was arguably his best season in the MLB, Bonds hit .362 with a .812 slugging percentage and an on-base percentage of .609. He also walked 232 times and won his second National League batting title.

Baseball fans in the Bay Area will not be soon to forget that remarkable season and Zakelj surely won over his new fanbase with his knowledge.