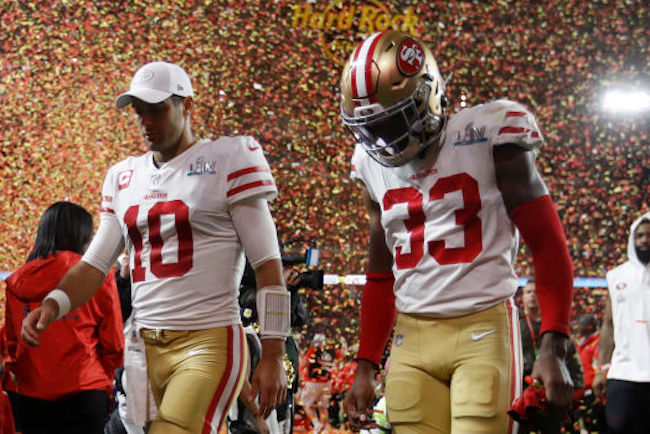 Every kid who grows up playing a sport fantasizes about what it’s like to win a championship but the closest most of us will ever come to experiencing that form of bliss is securing the trophy in the rec basketball league you signed up for to keep your hoop dreams alive after coming to terms with the reality that you’ll never possess the talents to be a real athlete.

On Sunday night, the Kansas City Chiefs got to taste some sweet, sweet championship victory after they beat the 49ers in Super Bowl LIV and every member of the team got the chance to relish the moment in their own unique way, like doing confetti angels on the field or, in the case of Andy Reid, setting out on a quest to eat the biggest burger in existence and spending the night with his trophy wife.

After the celebration at Hard Rock Stadium died down, the Chiefs decided to take advantage of what Miami has to offer and appropriately headed to LIV, a club in the city where Cardi B and Offset made an appearance to help Patrick Mahomes and the rest of the gang celebrate in style.

PatrickMahomes & the Chiefs In ClubLiv after winning the #SuperBowl 🏆 pic.twitter.com/7EuOwbemuo

The 49ers may not have been able to take the Lombardi Trophy home thanks in no small part to Kyle Shanahan’s tendency to forget how to call plays when his team has a sizeable lead late in a Super Bowl, but as corny as it may sound, they should be proud of making it as far as they did when you consider they finished with a 4-12 record last year and Vegas predicted they’d be lucky to crack eight wins this season.

As a result, Shanahan decided they still had a reason to celebrate despite the loss and decided to help numb the pain by telling everyone on the team to get their ass to American Airlines Arena to drown their sorrows at an afterparty of their own.

More video of Kyle and Kristin Juszczyk at the 49ers Super Bowl After Party.

Kyle Juszczyk having a good time at the 49ers Super Bowl After Party.

Sure, this is kind of like holding a wedding reception after your bride-to-be ultimately decides not to walk down the aisle, but if you already threw down the deposit, you might as well get your money’s worth.