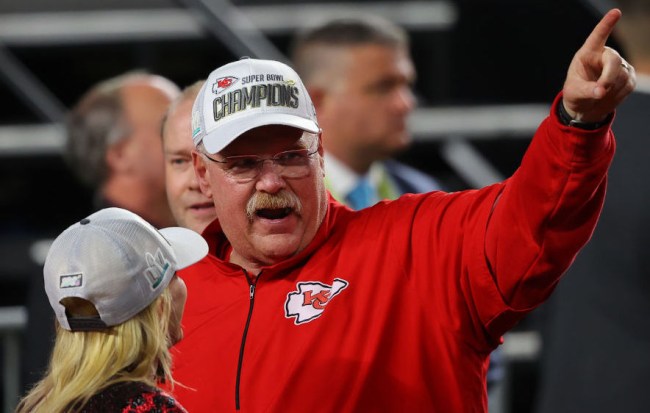 Anyone who tuned in to the past three Super Bowls without a rooting interest in the game probably didn’t have to think too long about which team to temporarily throw their support behind, as even people who normally couldn’t care less about football were still sick and tired of watching the Patriots playing in The Big Game yet again.

As a result, most people had a decision to make when it came to who to root for once the Chiefs and the 49ers punched their ticket to Miami, and while my wife made me feel so much better about myself by backing San Francisco because they have a cute quarterback, I was all-in on Kansas City to take home the Lombardi Trophy this year.

The team’s story was a fairly compelling one thanks to a few factors. The Chiefs hadn’t played in the Super Bowl in 50 years and Patrick Mahomes had the chance to prove he has what it takes to be The Next Big Thing, but as far as I’m concerned, there was one draw in particular the helped earn my allegiance: Andy Reid.

The Hawaiian shirt-loving long-lost brother of Wilford Brimley came into Super Bowl LIV with a very nice .609 record in the regular season and playoffs combined, and while he had won a ring while serving as an assistant coach for the Packers, he was still searching for his first championship while at the helm.

There are plenty of reasons to love Reid—especially his Ron Swansonesque affinity for some good, old-fashioned red meat, as he once crushed a 40-ounce steak in under 20 minutes and celebrated the win that got them into this year’s Super Bowl by eating a cheeseburger and crashing in bed.

After securing the victory last night, Reid said he was going to relish the moment by housing the biggest burger he’s ever taken on, but on Monday morning, he shed some more detail on how he celebrated while talking to reporters and issuing a hilarious flex.

"Well I didn't spend it with the trophy. Well I did – I spent it with my trophy wife." pic.twitter.com/tskSY7gp8Y

Tammy, the trophy wife in question, praised her husband after his big win for staying calm under the immense pressure he faced while preparing for the game.

Andy Reid & his wife Tammy are so cute! So happy for both of them! pic.twitter.com/2ItRfu3ImA

She also apparently forgave him for snubbing her kiss in favor of planting one on one of his offensive linemen.

Lol at Andy Reid skipping a kiss with his wife and instead kissing an offensive lineman. pic.twitter.com/SK2VF4vNgX

I’m also so glad to know Andy Reid is a Pitbull guy. I personally didn’t see it coming but it makes me like him even more.