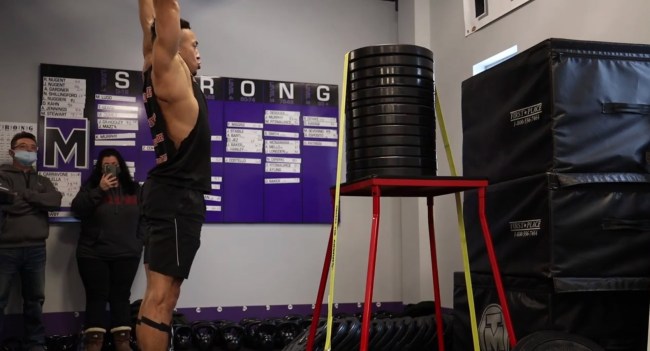 Chris Spell, a 25-year-old personal trainer from New York, recently broke a Guinness World Record by doing a 67-inch standing high jump, and he did it like it was no big thing.

And here we were thinking that D.K. Metcalf jumping laterally over a series of 42-inch hurdles was impressive AF (because it is).

Spell had previously set the record in July 2019 and held it until September 2019 until a man named Brett Williams from Texas beat his world record with a 65-inch vertical jump.

A couple of years ago, Wired published a video explaining how it is practically impossible for a human being to jump higher than 50 inches.

I guess no one told that to Mr. Spell.

Or this guy, Evan Unger from Canada, who set a Guinness World Record awhile back by doing a one-legged box jump of 52.99 inches. (Really? They couldn’t give him the extra 0.01 inches to make it a nice round 53?)

“This one felt a lot different than the previous time I had the record because once I had it taken away from me, I took it a little more personally,” Spell told lohud.com after his record-setting box jump. “I kind of had a chip on my shoulder to make sure that I got that back. I had an extra fire underneath. This jump felt much sweeter at 67 inches.”

So… how in the world did Spell pull it off, you know, considering it’s by most estimations, it is physically impossible to box jump 67 inches?

Spell, who is only 5-foot-9, has racked up over 26,000 followers on Instagram, mostly because dude can jump out of the gym.

So what’s next for Spell?

“I’d like to take a little bit of a break and getting into squatting heavy, sprinting, all the things I needed to save my legs for to box jump,” Spell said. “In a more long term sense, I would say it depends if this record gets broken again. If it does, and I’m able to go get it back, maybe I’ll go for the same world record again. There’s also a standing single-leg jump world record that I think I can do, so that’s always an option.”

Look out, Mr. Unger. Chris Spell is coming for you.