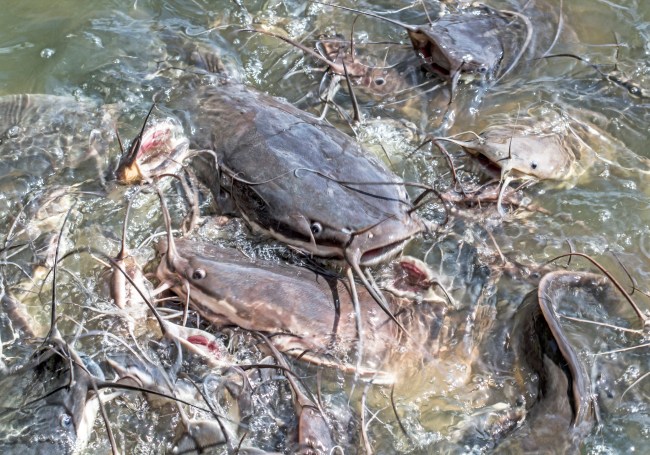 A Tennessee angler has made worldwide news after hauling in a massive Blue catfish while fishing the Tennessee River, the largest tributary of the Ohio River.

Paula Cathey Smith was fishing 75 miles west of Nashville. She got the urge to break in the new rig she received as a Christmas present and went on down to the river with her husband. New reel, new bait. Instead of their usual fare, they decided to mix it up and fish with Gizzard Shad which might’ve been the difference maker since she landed the largest Blue Catfish of her life.

After a grueling fight, she threw the massive catfish on the scale where it weighed in at 88-pounds but she and others believe the fish was actually closer to 92-pounds because the tail of the fish was hanging off the boat and a portion of it was resting on her husband’s leg, according to ABC News. This would’ve caused the scale to register less than the total weight.

Just look at this absolute slob of a catfish that’s probably been ruling this river for years, swallowing up things like ducks and anything else that got in its way.

The eyeballs on this Blue Catfish are insane. They’re popping out some and it makes me think of Arnold Schwarzenegger’s character in Total Recall back in the 80’s.

Smith said "it's just a matter of time" before she beats the state record of 130 pounds. https://t.co/5MwcJPCzs9 pic.twitter.com/jsdrAliKjm

This angler is big on catch-and-release fishing and sent this behemoth back into the river to live another day:

After Smith won the battle with the gargantuan catfish, she pulled it in the boat, weighed it, snapped a few photos and released it back into the water.
"I'm a firm believer in catch and release," she said, adding that catfish are "more able to take that stress than other fish." (via)

According to ABC, Paula and her husband are both avid fishermen but she’s much more active and accomplished than he is in the world of angling. She recently placed 3rd in a catfish fishing competition by bringing in a 30-to-40 pound Blue Catfish near Bumpus Mills, Tennessee.