New Details About Aaron Hernandez’s Life In Prison Have Surfaced, And They Are Ugly 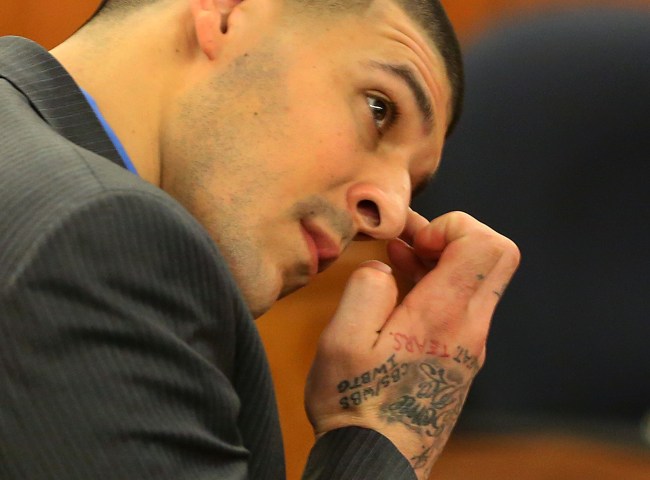 There have been no shortage of anecdotes describing Aaron Hernandez’s time behind bars. The overarching collective theme is that behind the maniacal, cocksure inmate with a hardened exterior was a damaged, lonely man failing to find meaning.

Nine months after Hernandez hanged himself in his cell, his plight remains fascinating. The man who was gifted a $40 million contract and was once the most promising young players in professional football traded in the world for a dingy prison cell. In the course of 10 months that he spent in Massachusetts’ Bristol County jail’s segregated unit, Hernandez racked up 120 days in solitary confinement.

New details about Hernandez’s behavior have been made public via James Patterson’s new book, All-American Murder. The book claims that Hernandez punched a fellow inmate and self-proclaimed Patriots fan in the face after beating his chest and yelling “I’m built for this shit,” earning him an assault and battery charge and two weeks of straight-up solitary confinement.

Sheriff Thomas Hodgson was shocked about how the expectations of Hernandez joining his jail was far from the reality.

“We were so worried about protecting him,” he said, “we never thought that he would be the aggressor.”

Officers once found a piece of paper with the letters ‘MOB’ written on it. When confronted, Hernandez claimed that the acronym meant ‘Money Over Bitches,’ but prison authorities knew that within its wall, the letters meant something else: ‘Member Of Bloods.’

In the end, Aaron did get the report — and, to the officers’ amazement, he did eat it. [h/t NY Post]

Later, when a corrections officer denied him an extra meal, Hernandez called him  “a scared bitch” and said that when he was released from prison, he was going to kill the officer and shoot his family.

“After stating this, inmate Hernandez appeared to make a noise that sounded like a machine gun,” the officer wrote in his report.

“I did not say I was going to kill him or his family,” Hernandez said, in his own defense. “I said if I see COs that act tough in jail, out of jail, I’m going to slap the shit out of them.”