It Appears That Packers Running Back Aaron Jones Has Been Hacked 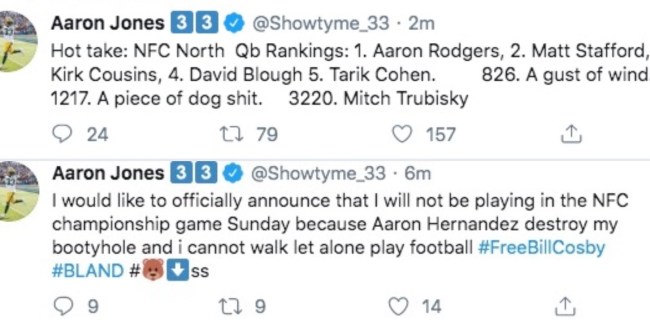 Hackers, man. Who knows how or why they do this shit. Truth be told, it seems like quite a hassle, unless all of these famous people really are just awful at crafting secretive passwords. If I was a hacker (which I’m very much not, I get locked out of my own bank account regularly), I’d at least try to get a couple hundred bucks out of the ordeal. Otherwise, what’s the point? It’s not like you’ll be able to take credit for it.

But, of course, as my dog Alfred Pennyworth once said, some men aren’t looking for anything logical, like money — they can’t be bought, bullied, reasoned, or negotiated with — some men just want to watch the world burn. And it appears that Green Bay Packers running back Aaron Jones has become the victim of that very type of person.

Just two days prior to the Packers’ NFC Championship showdown against the 49ers in San Fransisco, Jones — who rushed for 1084 yards and 16 touchdowns on 236 carries this season — was forced to take to Twitter to announce that he’s been hacked.

And based on what the tweets say — unless Jones is suffering from a sudden case of the Antonio Browns — he was definitely hacked. 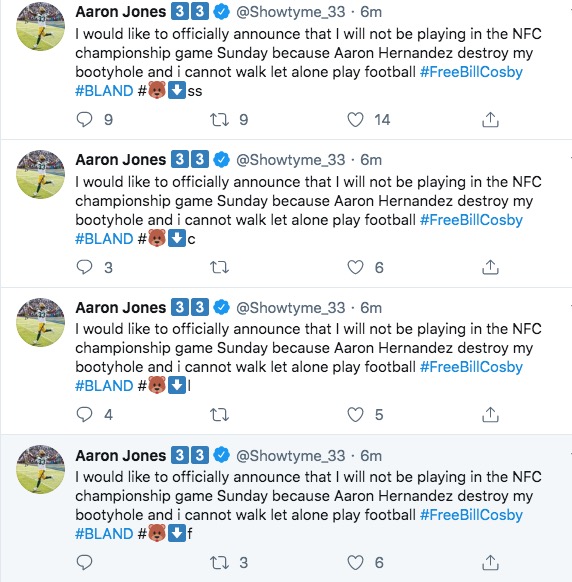 Gotta say, to be fair to whoever did hack Jones’ Twitter account, they’re obviously an astute analyst of the game of football, as their quarterback ranking is spot on.

Aaron Jones, Aaron Rodgers, and the #2 seed Green Bay Packers (13-3) will continue their quest to Super Bowl LIV on Sunday when they travel to San Fransisco to take on Jimmy Garrpollo, Richard Sherman, and the #1 seed San Fransisco 49ers (13-3) at Levi’s Stadium at 6:40 p.m. EST.