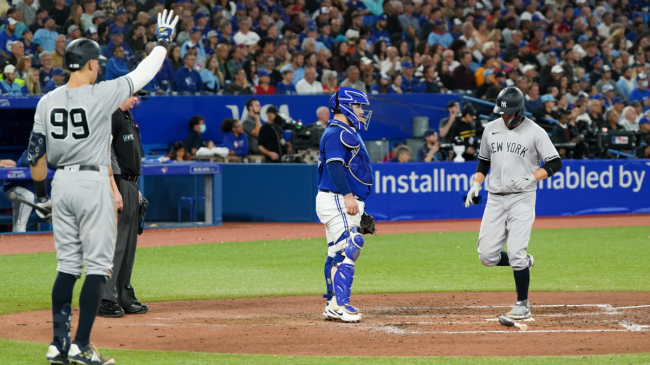 Those clips typically feature an important sports moment being interrupted at the worst possible time as the screen cuts to the Bronx. Those hilarious videos often see Judge uneventfully getting walked before flipping back to regularly scheduled action after the big play is through.

And they’re really not far from the truth. College football fans, in particular, are getting fed up with having to see split screens of Yankee games in the middle of action on the gridiron.

Listen, we get it. Everyone wants to be a part of history. But those most interested, believe it or not, would likely find a way to, you know, tune into the Yankee game itself.

Everyone else can catch the 62nd homer on social media shortly after the feat is accomplished.

Making things worse, this chase for the record has been dragging on for two weeks. Judge was stuck on 60 for seven games (much to the dismay of Roger Maris, Jr.) before finally tying the mark in late September.

Since then, the slugger has gone homerless over his last 26 plate appearances.

Judge went 1-for-5 in his most recent outing against the Rangers, failing to leave the yard. One of his at-bats happened to take place during an airing of NBA Today, but there was one key piece missing when the screens split to the baseball game.

During an episode of NBA Today on Tuesday, ESPN cameras cut to Aaron Judge cam in his pursuit of 62 HRs. But there was one problem.

Aaron Judge wasn’t at the plate.

Instead, the cameras caught Kyle Higashioka who hits ninth in the order, one spot ahead of Judge. The reaction from the crew was great.

The cast of NBA Today react to realizing their show has been interrupted to show the at bat of Kyle Higashioka and not Aaron Judge. pic.twitter.com/FqiBKgJzXX

Richard Jefferson: “We’re a little early, I see. Who is this guy?”

Jalen Rose: “For those of us that actually watch baseball when it’s not historic, you’re right about timing. This is about to take another 5 minutes before [Judge] bats.”

Jefferson: “Watch, this is gonna be one of those 23 pitch at-bats.”

Luckily for the crew, Jefferson was wrong on the length of that at-bat. Higashioka struck out on three pitches before giving way to Judge, who popped out to first to end the inning.

Still, the response to the error was A+.