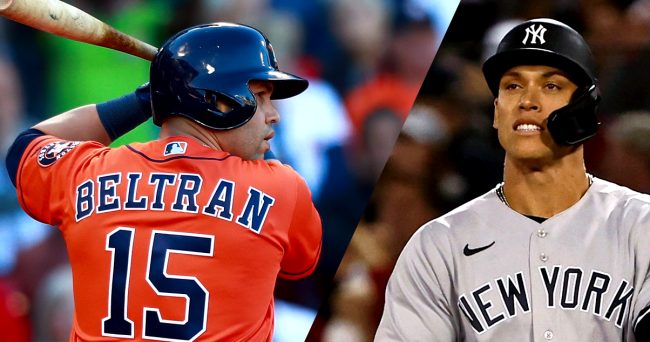 Back when the Houston Astros’ sign-stealing scandal broke in 2020, numerous Major League Baseball players were very ticked off. Especially angry were players on the Los Angeles Dodgers and New York Yankees – teams the Astros cheated against to get to and win the 2017 World Series.

Everyone from Mike Trout and Vladimir Guerrero, Jr. to Kris Bryant and Cody Bellinger went off on the Astros.

Bellinger was particularly pointed, saying at the time, “I mean these guys were cheating for three years. I think what people don’t realize is [Astro Jose] Altuve stole an MVP from Judge in ’17. Everyone knows they stole the ring from us.”

Speaking of Aaron Judge, he too was obviously upset that his team was beaten by the Astros and lost out on the MVP to one of their players in 2017.

The Yankess, however, are now the subject of their own potential sign-stealing scandal and have since hired one of the former Astros who was suspended by Major League Baseball for his part of their scandal, Carlos Beltran.

On Sunday, Beltran finally issued a mea culpa for his part in the scheme in a interview with his new employer, the YES Network.

“I wish I would’ve asked more questions about what we were doing,” Beltran admitted. “I wish the organization would’ve said to us, ‘Hey man, what you guys are doing, we need to stop this.’”

Beltran ended up losing his job as the new Mets manager in 2020 before every coaching a game as a result of the scandal.

So what does someone like Aaron Judge, who was significantly affected by Beltran and the Astros’ cheating in 2017, think about Beltran now working for his team? He’s cool with it.

“I’ve got a lot of respect for Beltran, he helped me a lot during his time here as a player,” Judge said on Sunday. “Learned a lot of good lessons. He spent a lot of quality time just kind of talking to me about the game, the mental side of the game, his approaches, how to be a good teammate.”

That’s quite a turnaround from when Judge said Beltran and the Astros “cheated” and “didn’t earn it.”

“I’d love to talk to him,” Judge continued. “It’s been a while since I’ve seen him. Just getting a chance to catch up with him and see what he’s up to because we’re to be seeing a lot of him during the year. Just looking forward to having him back around because he was a big part of this team, a big part of baseball, what he brings to the game and what he’s going to bring to the YES Network is going to be big time.”

Judge even added, “I’m just going to focus on what we’ve got to do with that. If he sees anything, if he’s got any advice that can help us, I’ll definitely be talking to him.”

Many baseball fans were left stunned by Aaron Judge’s seemingly hypocritical stance on Carlos Beltran and the Astros now that the Yankees have hired the former Astros outfielder and are possibly on the verge of being outed as cheaters as well.

Between Cashman last week, Beltran (who was the ring leader) now with YES, and now Judge, they are all deflecting before the letter release I think.

In other words, if you're a cheater and can help Aaron Judge, he's cool with you. Carlos Beltran is a saint once again. Ha!https://t.co/ocXLFhaLRN

Could ⁦@TheJudge44⁩ Aaron Judge #Yankees be a bigger phony?
All that gum flapping about “cheating #Astros” but he gives Beltran a pass bc he works for ⁦@YESNetwork⁩ now? #Phony #Fraud
(Also #ReleaseTheLetter since NYY got caught cheating too) https://t.co/qbw6HL2wiH

Mutually agreed upon language. Hire Beltran only if he apologizes and have everyone in the organization embrace him and absolve him of fault. It’s completely phony.

Basically, fans are feeling how Carlos Correa was feeling when news first broke that the Yankees may also have been cheating.