Aaron Rodgers Has An NBC Related Conspiracy Theory About His Doppelganger 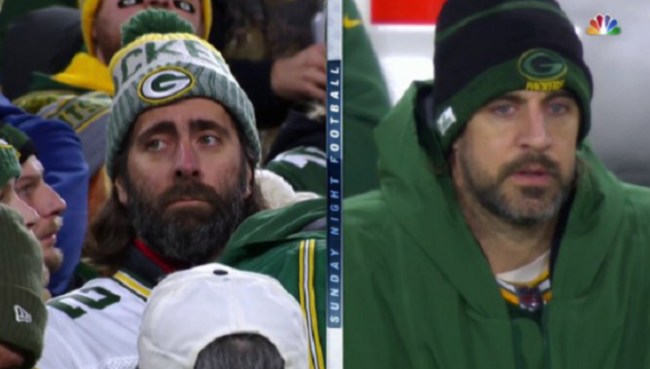 During Sunday night’s Packers-Bears game the world was introduced to Aaron Rodgers’ doppelganger. The lookalike sparked quite the reaction from NFL fans given the fact just how much the man resembles the Green Bay quarterback.

The man probably could’ve walked into any bar in Wisconsin and convinced most people he was, in fact, Aaron Rodgers. So, who is this Rodgers lookalike mystery man?

According to Pat McAfee, the guy is “allegedly a Canadian Bavarian fella who lives in Germany. Rodgers joined McAfee’s show on Tuesday and offered up his own theory about his doppelganger and is convinced he was planed by NBC.

“Total plant, that was a total plant by NBC,” Rodgers explained “The thing that makes me think he might have been a plant is, doesn’t he turn to the camera and acknowledges the camera? Has he got a SAG [Screen Actors Guild] card?”

"That guy was a total plant by NBC" 😂😂 ~@AaronRodgers12#PatMcAfeeShowLIVE pic.twitter.com/KgwkCto4dF

Rodgers’ point about the lookalike pointing at the camera does support his theory about him being a plant, but as McAfee explained, who wouldn’t point at a camera that’s staring at you for multiple minutes at an NFL game? That’s a natural reaction.

The Internet sleuths appear to have done their job in finding out who the man in mystery is and all signs point to @SherbyFranky on Twitter. He posted a selfie after Sunday’s game saying he was finally home after a legendary weekend.