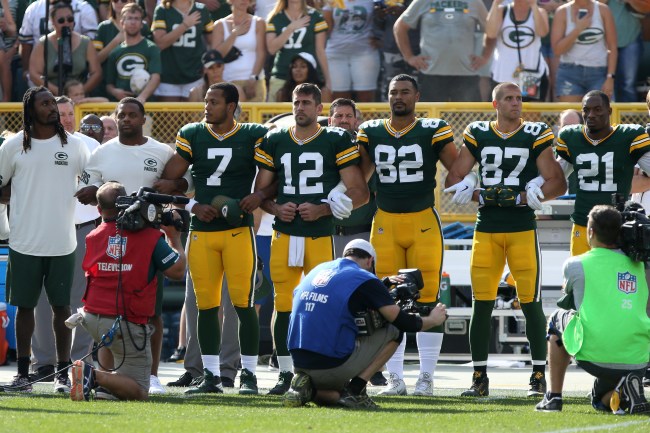 Drew Brees’ comments about respecting the flag during the national anthem have been widely panned from players from around the NFL and even from some players in other sports like LeBron James.

WOW MAN!! 🤦🏾‍♂️. Is it still surprising at this point. Sure isn’t! You literally still don’t understand why Kap was kneeling on one knee?? Has absolute nothing to do with the disrespect of 🇺🇸 and our soldiers(men and women) who keep our land free. My father-in-law was one of those https://t.co/pvUWPmh4s8

Green Bay Packers quarterback Aaron Rodgers has responded to Brees’ comments in an Instgram post where he reiterated that players kneeling during the anthem was never about the anthem or a flag.

A few years ago we were criticized for locking arms in solidarity before the game. It has NEVER been about an anthem or a flag. Not then. Not now. Listen with an open heart, let’s educate ourselves, and then turn word and thought into action.

Brees has since tried to clarify his comments about the anthem while speaking to ESPN.

I asked Drew Brees about reiterating his stance on the anthem (and the backlash over doing so). More to come, but among his responses: "I love and respect my teammates and I stand right there with them in regards to fighting for racial equality and justice. I also stand with… https://t.co/fAxchR69ns

“I love and respect my teammates and I stand right there with them in regards to fighting for racial equality and justice,” “I also stand with my grandfathers who risked their lives for this country and countless other military men and women who do it on a daily basis.”