Aaron Rodgers’ Former Teammate, Jordy Nelson, Comes To His Defense Over All The ‘Comical’ Criticism Claims 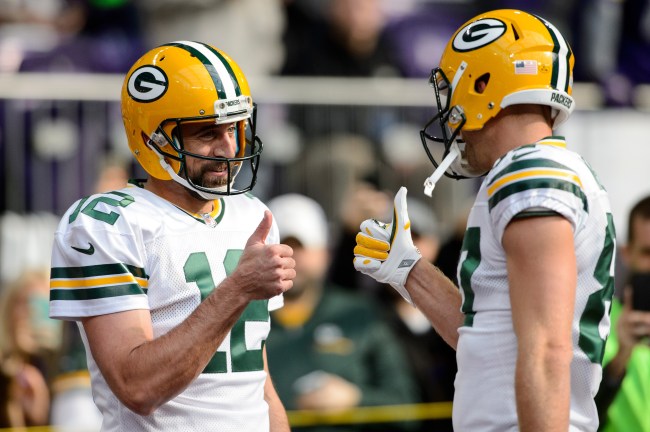 Aaron Rodgers of the Green Bay Packers is one of the baddest MFers on a football field. Not only has he proven that over the course of his 14-year NFL career — which includes a Super Bowl victory, a league MVP and other individual accolades — but, as the quarterback of, arguably, the most prominent franchise in pro football, Rodgers has been the leader and voice of the Packers since he took over the starting role for the 2008 season.

After replacing an all-time legend in Brett Favre, many people have pointed criticism at Aaron Rodgers over his lack of leadership or the way he treats teammates. It’s different from Favre’s style, that’s for sure, which included lots of frat boy jokes and a more laid back style. Rodgers’ is more businesslike — at least in front of a microphone — but the dude definitely seems like he’s got a good relationship and the respect of his teammates.

However, a few of those former Packers teammates have come out and basically thrown Rodgers under the bus, with one saying that the quarterback’s “arrogant,” while another said No. 12 isn’t a natural born leader. While those are just the opinions of two guys, the media took the opportunity to run with the stories — and one of Aaron Rodgers’ other former teammates, wide receiver Jordy Nelson, is here to shutdown all that BS talk.

Speaking with Madison.com, here’s what Nelson had to say about all the criticism Aaron Rodgers has been taking lately, coming to the defense of his former quarterback.

“Everyone knows negativity sells. People don’t want to hear (the good). People feel better about themselves when they hear bad things about other people. And that’s why that gets more pub.”

“I mean, no one wants to hear that Aaron’s not only obviously a great quarterback but a great leader and does everything right. All right, there’s your story. What fun is that? So whenever they can, they go back to the well and get the same people to say the same stuff.”

Nelson, who played with Rodgers on the Packers up until the 2017 season, enjoyed lots of success with Green Bay, so he may feel forever loyal to his former quarterback. That said, he’s not necessarily wrong with his assessment, as bad news is often juicier than the good stuff.

Jordy Nelson didn’t stop there, though, adding this to show support for Aaron Rodgers:

“I think if you look, there’s two guys — now three (with Gbaja-Biamilia) — saying it, compared to the hundreds that are saying the opposite. It doesn’t make sense. I think it’s comical when I read those comments.”

Nelson continued his interview by questioning the motive behind some of Rodgers’ other teammates giving such criticism, as well as giving more examples of why the Packers signal-caller is, in fact, a leader. You can listen to the full interview here to hear some of the other things the wideout had to say.

Given his success, it’s natural for people to criticize Aaron Rodgers. Unfortunately, it comes with the territory of being a great player, as other athletes in different sports — like Michael Jordan and others — getting called a bad teammate because they pushed other players hard. Guess some people just can’t handle it.