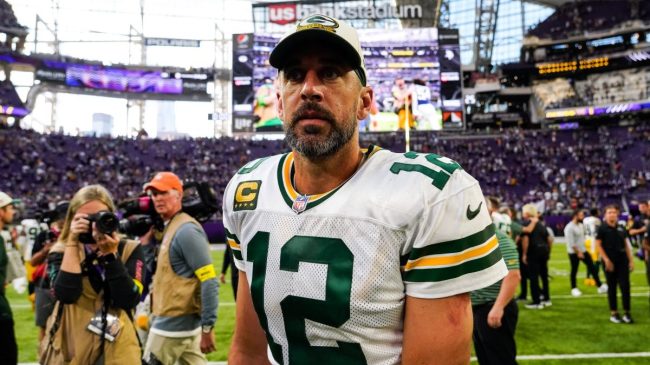 Sometimes building a relationship is all about making concessions. But when you’re the two-time reigning NFL MVP and your teammates have done little to nothing in the league, those dynamics tend to change a bit.

Rodgers and the Packers were downright awful in an embarrassing 23-7 week one loss to the Minnesota Vikings. The four-time league MVP was just 22-of-34 for 195 yards, no touchdowns and one interception. He also lost a fumble.

But he’s not about to make any changes.

Call it stubbornness, bullishness, or whatever you’d like. But Aaron Rodgers isn’t about to make any changes to the way that he plays.

Rodgers met with the media on Wednesday and discussed the difficulties of playing with an inexperienced receiving corps and losing his No. 1 wide receiver.

ESPN’s Rob Demovsky had more on the signal-callers comments.

The latest on the Packers, how Aaron Rodgers is approaching the growing pains on offense and Allen Lazard’s status from this evening’s @SportsCenter: pic.twitter.com/VOC2z9Qymy

“I’ve got to play the same way,” Rodgers said Wednesday. “I don’t play the way I played in 2011, [but] I’ve got to play on time and guys gotta get open, so no, I’m not gonna change the way I play. I have to realize who’s out there, who we’re throwing to and how we’re gonna actually make some hay and score some points.”

Packers head coach Matt LaFleur said that he was happy with how his star QB had handled the situation. LaFleur added that Rodgers has demanded a sense of urgency from the young players to get things turned around.

Rodgers, meanwhile, wasn’t ready to blame the performance on the loss of All-Pro wideout Davante Adams to the Raiders in free agency.

“I didn’t lose a fumble all last year and hadn’t thrown a pick in a division game in, I don’t know, a while, so that’s kind of the standard that I hold myself to, regardless of who’s out there with us,” Rodgers said. “So that’s why that’s frustrating. I don’t look at it as ‘Tae’s not here [so] I’ve got to do even more or play perfect football.’ I’ve just always held myself to a standard of taking care of the football and that wasn’t good enough on Sunday.”

Green Bay plays another division rival, Chicago, on Sunday Night Football at Lambeau Field. And the Packers wide receivers will certainly be under the microscope.