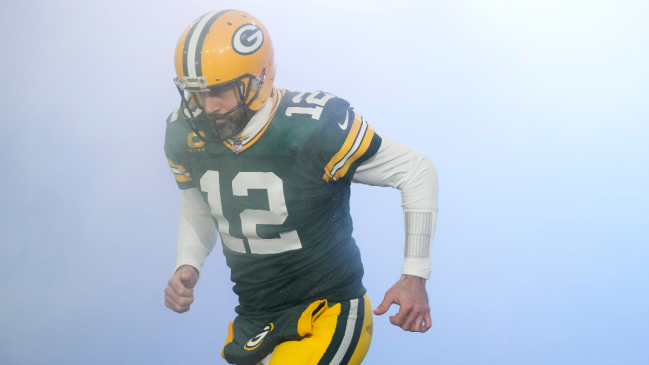 The 2022 NFL season proved a tough time for both Aaron Rodgers and the Green Bay Packers.

Things began with the Packers shipping Rodgers’ top target, Davante Adams, to the Las Vegas Raiders in a blockbuster trade.

That must have proved difficult for Rodgers, who then spent the offseason tripping on ayahuasca in South America. Unfortunately, the traditional medicine did not benefit either side when it came to his play on the field.

Rodgers had one of the worst full seasons in his carer as a starter. The four-time NFL MVP threw for 3,695 yards, 26 touchdowns and 12 interceptions as the Packers limped to an 8-9 record.

Despite his struggles, Green Bay still had a chance at making the playoffs. But all hopes were dashed when the Detroit Lions rolled into Lambeau Field on the final week of the season and walked away with a 20-16 victory. Rodgers went just 17-of-27 for 205 yards, one touchdown and one interception in the loss.

Rodgers then refused to swap his jersey after the contest, sparking speculation that he may have played his last NFL game.

But it turns out he may well have other ideas, and the Green Bay Packers seem aware of those plans.

ESPN’s Adam Schefter spoke about Rodgers’ future on Saturday’s edition of NFL Countdown prior to the divisional round of the NFL playoffs.

Schefter said that while retirement may be on the table, it’s more likely Rodgers pursues a trade.

“This will be the third straight offseason in which Aaron Rodgers’ future is the subject of much speculation. But make no mistake, both sides are fully aware that a trade is very real scenario this offseason for Aaron Rodgers. The Packers are expected to move on from certain players, which Aaron Rodgers probably will not like.” – Adam Schefter on NFL Countdown

Schefter then stated the Rodgers’ contract, which still has $110 million left on it, could be stumbling block. But that a trade involving Rodgers is still a “real possibility.”